Have been having a good two days of conference, "From Mbari Mbayo to Iwalewahaus" hosted by the Iwalewahaus, University of Bayreuth. It is perhaps the first major attempt to reassess the legacy of this unique, very dynamic institution, which inevitably turns on the vision of its founding director, Ulli Beier. But it also, I think, comes at a crucial juncture in the life of Iwalewahaus: in the next month or so, it will relocate to a significantly bigger and more visible building--a befitting acknowledgment on the part of the university administration of the fact that this space for study, research and production of African arts the likes of which you are not likely to find anywhere else, is also arguably the university's most important calling card outside of the German State of Bavaria. Listening to many of the presentations, it is impossible to not see why the character of the Iwalewahaus, which in many ways reflects Beier's unflinching belief in the role of literary and expressive arts in the making of progressive postcolonial society, must be sustained; but one is also reminded of the need to build on this legacy, by expanding its intellectual purview and keeping pace with cultural production and discourse of the present through its new academic and artistic programs, and its ambitious, digital archiving projects. That is now the task of Ulf Vierke, who as director go the Iwalewahaus will take the institute to that next level.

Among the many participants are important Nigerian artists such as Obiora Udechukwu Muraina Oyelami, and Nike Davies-Okundaye whose careers and the history of the Iwalewahaus are entwined by virtue of Beier's support of their work; leading scholars and curators including Rowland Abiodun (Amherst College) who gave the keynote, Wolfgang Bender, Jutta Stroter-Bender, Wole Ogundele; the award-winning South African architect and patron Peter Rich whose presentation was on the influence of Panco Guedes, the legendary Architect and friend of Beier, on his own illustrious work; and the collector Heinz Greiffenberger among others. Quite important, His Royal Majesty, the Ataoja of Osogbo attended the conference; the first visit by the King to Iwalewahaus since its inception in 1981.

Anyone familiar with the institute will notice that I am writing its name differently: as "Iwalewahaus" rather as "Iwalewa-Haus", it's original name. Recently, Ulf Vierke and his team decided to rearticulate the institute's corporate identity. So the new form "Iwalewahaus" and a new logo, which I really like, are part of this change. With the move to the new building, a new master in Art History and Curatorial Studies program, and the Univ. of Bayreuth DEVA project, the future of this unique institution founded by Ulli Beier seems secure, the continued significance of it's work assured.

And, oh there was this encounter with two paintings by the Nigerian artist Colette Omogbai who graduated from the art school in Zaria in 1964 as one of the most exciting talents in the Lagos Art scene. She even published an unprecedented feminist manifesto "Man Loves Something Sweet", in Nigeria Magazine, and then she disappeared from the art scene. So here was I in the exhibition at the Iwalewahaus gallery, and right in front of me were two oil paintings by Omogbai! Dark, impastoed surfaces with abstract forms that soon turned into body parts of agonizing, menaced figures. So, finally, I have seen her work up close. Finally. Thank you Iwalewahaus, and the visionary, Ulli Beier, for making this possible. 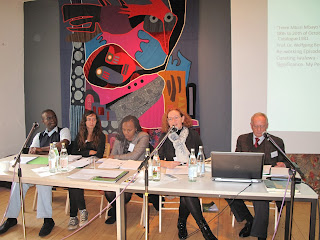