To the Milkyway
Posted by Chika Okeke-Agulu at 8:54 AM No comments:

Every year for the past five years, Yve-Alain Bois--the Institute of Advanced Study and Princeton University-based art historian--organizes a spring Garden Party for the New York-area art world folks at his home deep in the woods of New Jersey. The setting in the NJ farm country reminds you why this place is called the Garden City State. Beautiful. Nature. Fundamental! (How do you survive the concrete jungle after spending time here? I don't know). Anyways, he treated his many guests--adults, children, pets--to an afternoon of "buffet lunch, drinks, frolicking in the grass, ping pong, pétanque, whatever." The "whatever" in fact included the "weather", because it was manifest in all its verdant spring glory. Ah, one more thing: Yve-Alain has these stacks of cut seasoned cherry wood that have now compelled me to want to return to my first love--wood carving. I left with two hefty logs in my trunk. This is serious! Anyways, here are a few photos from the party: 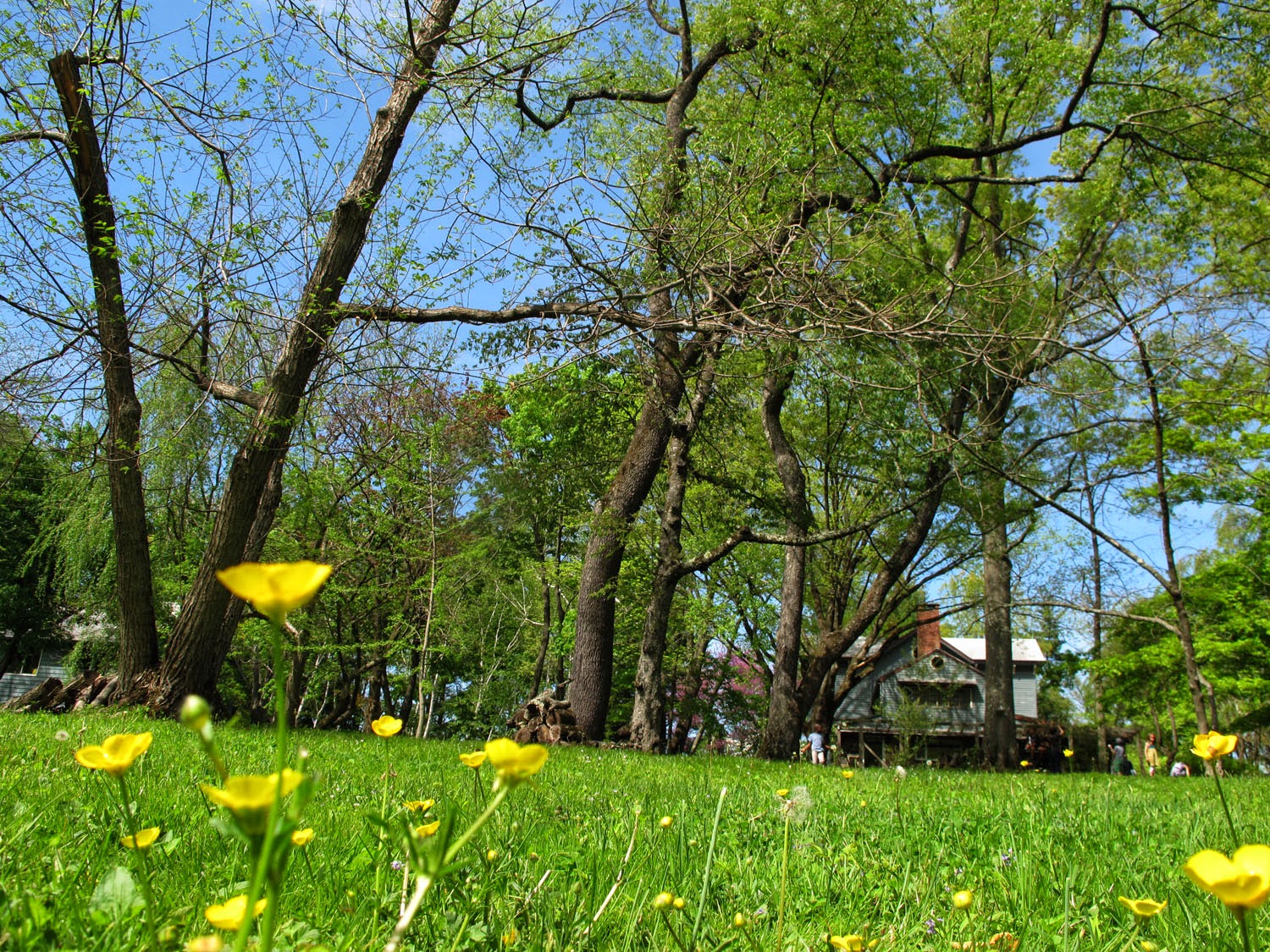 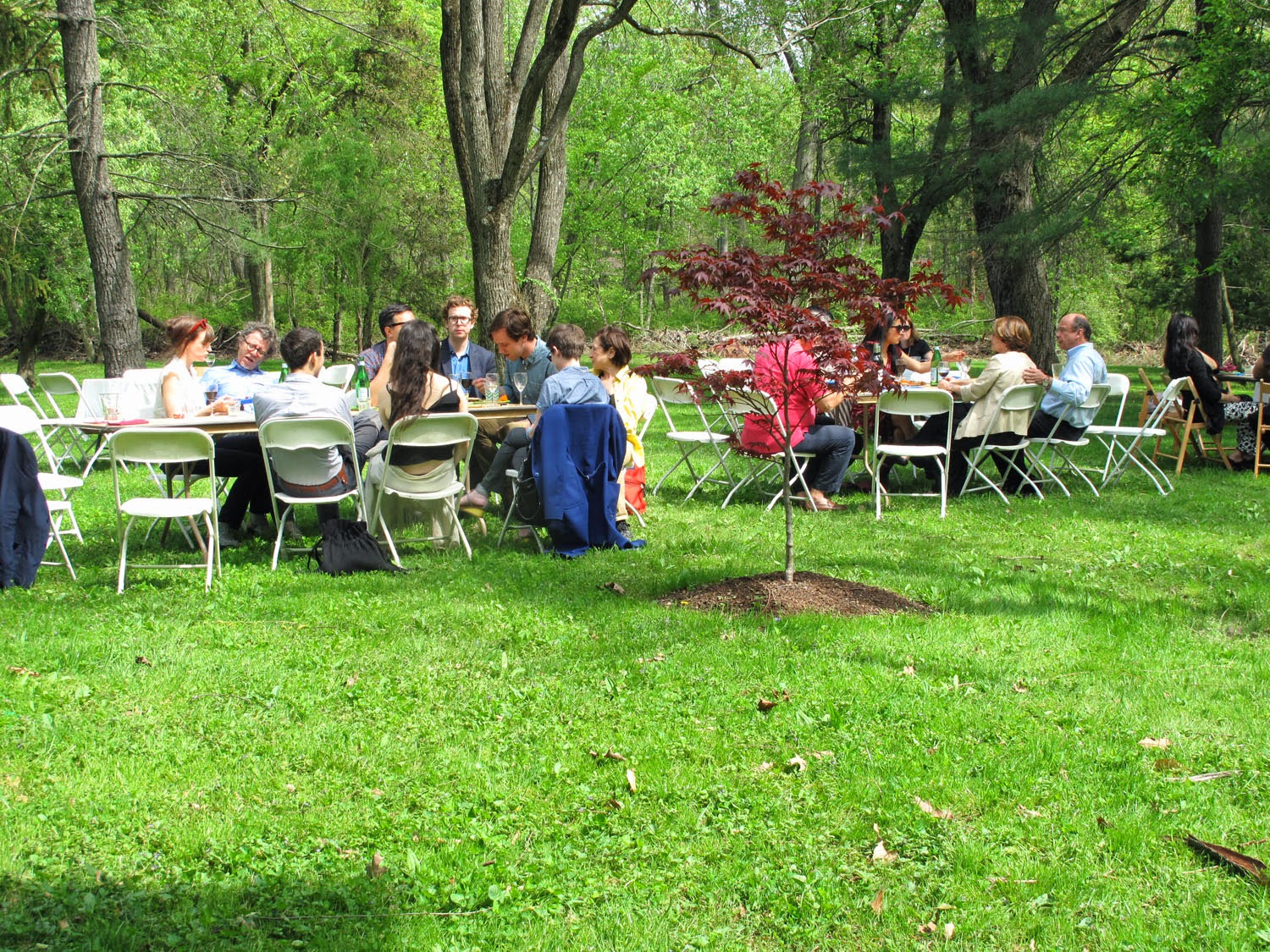 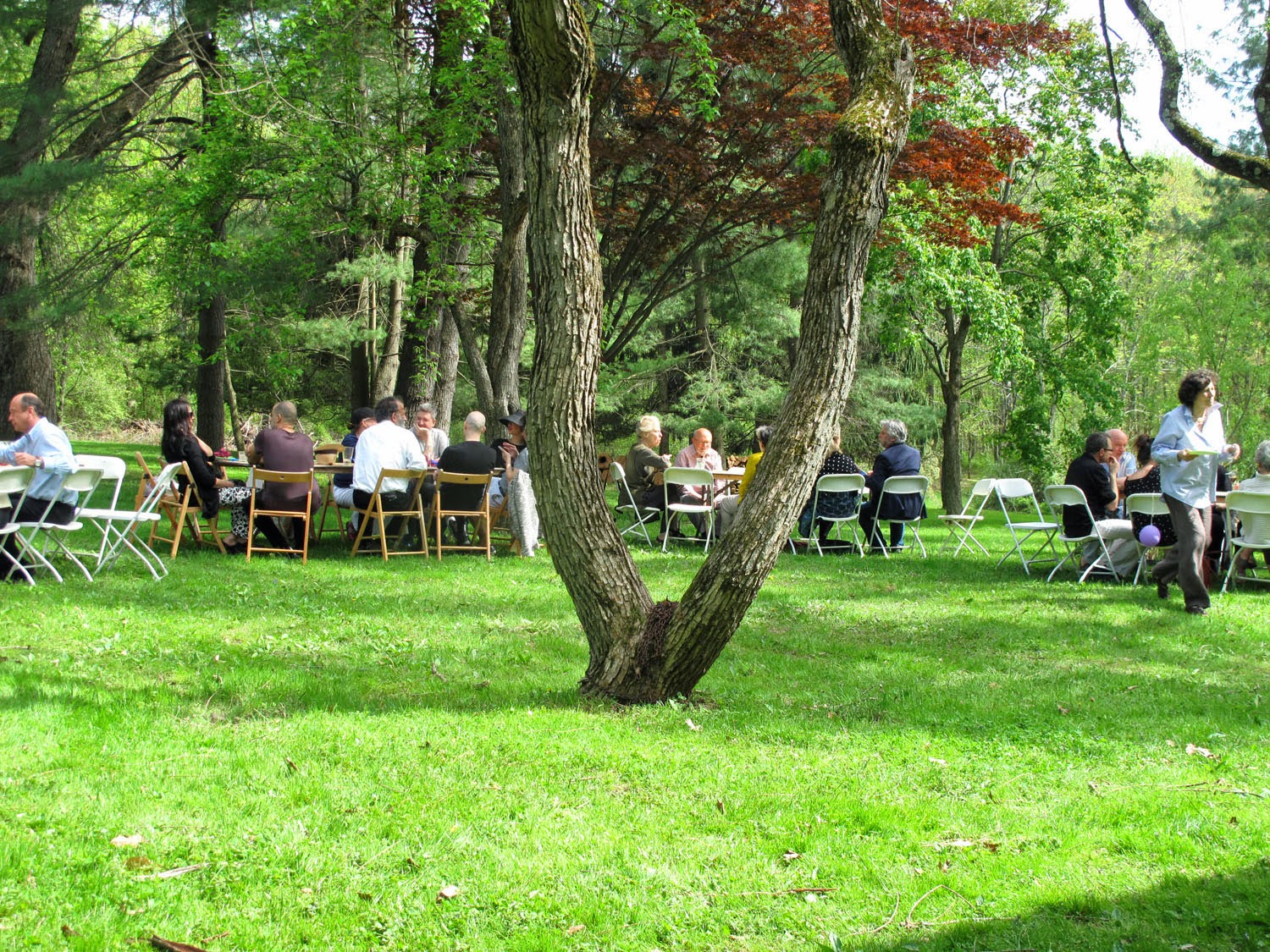 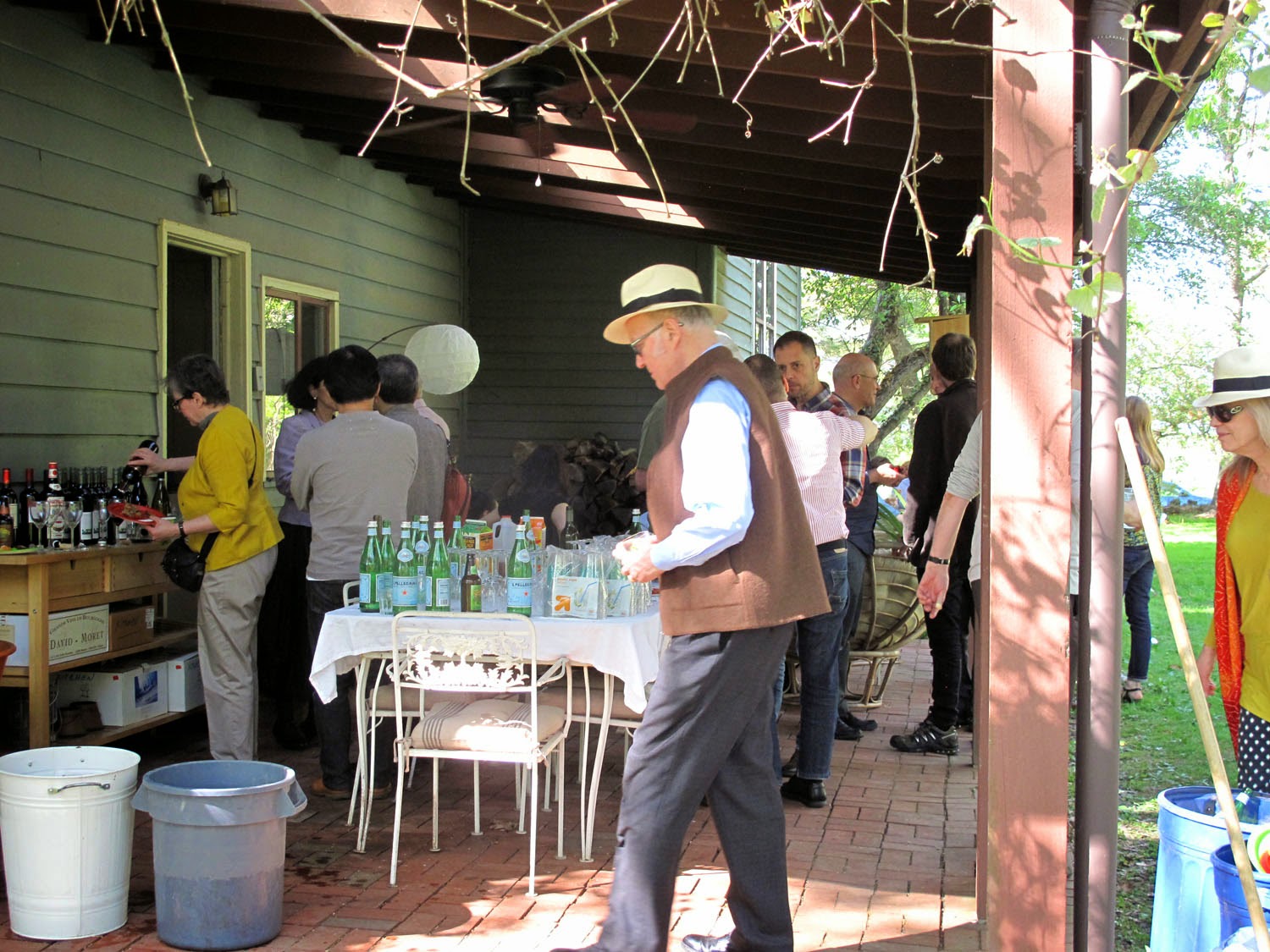 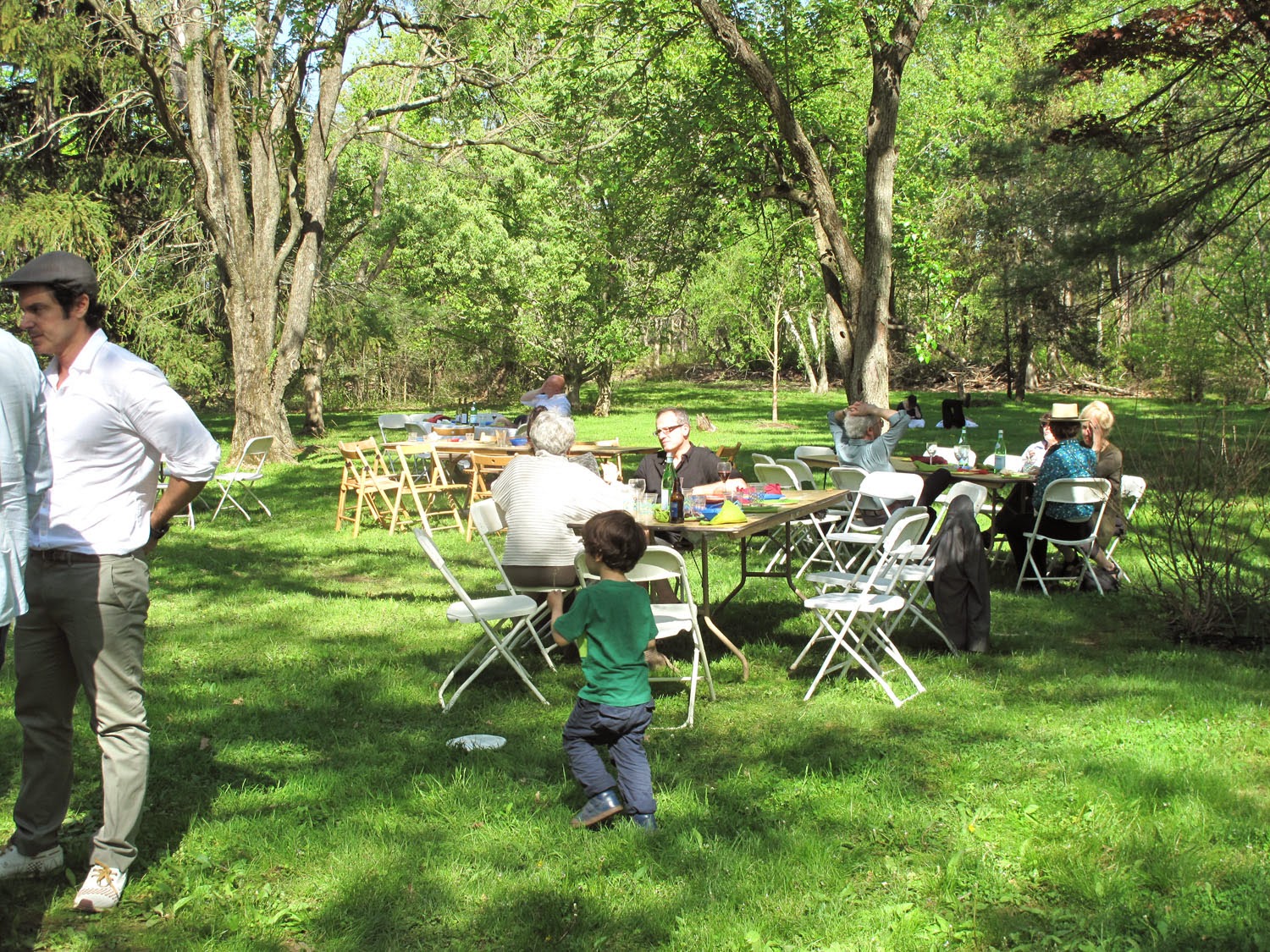 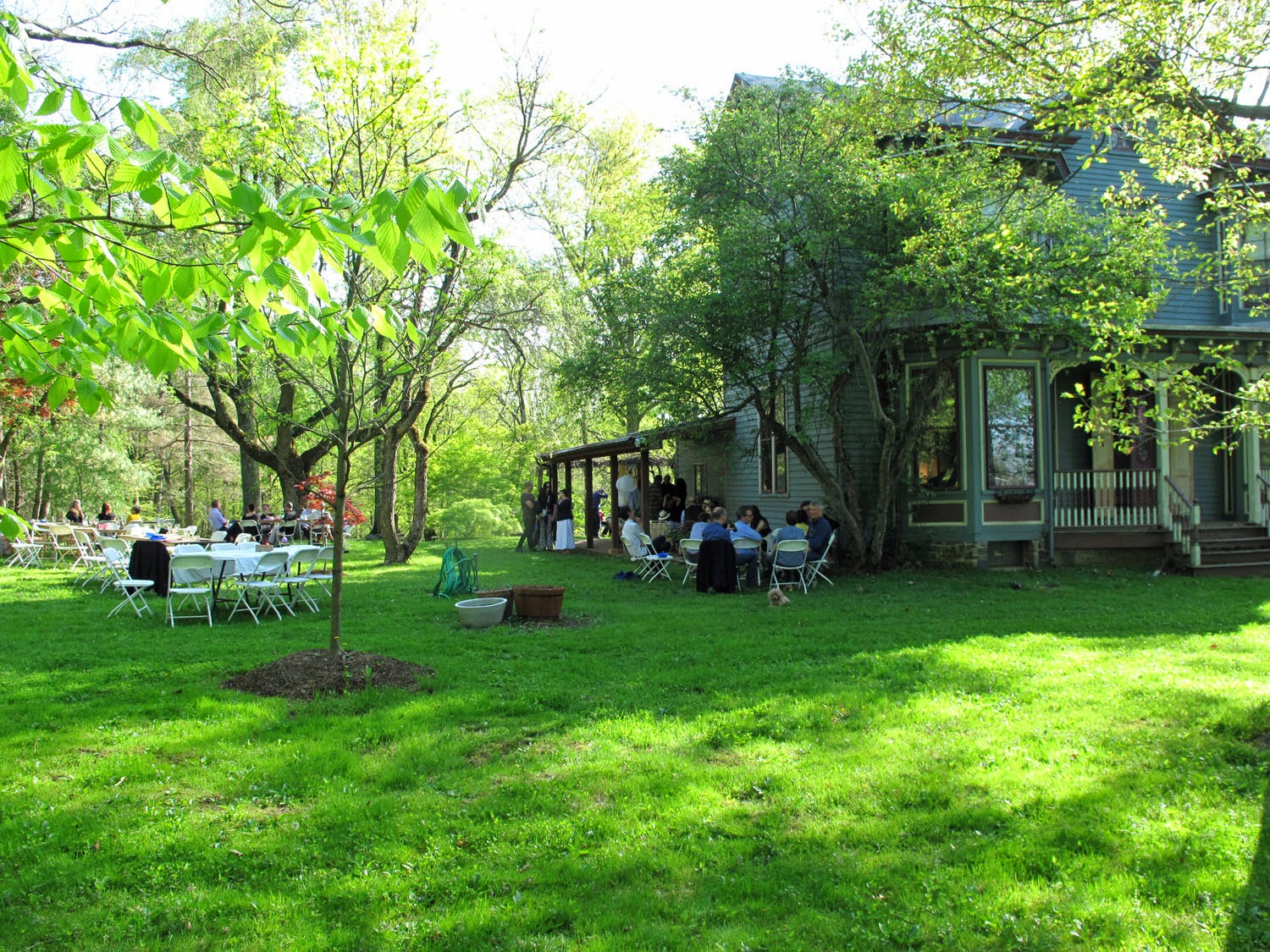 Posted by Chika Okeke-Agulu at 1:59 PM No comments:

Raison Naidoo, the director of South Africa's premier art museum, the Iziko: South African National Gallery for the past five years has written a public statement in response to the refusal of the authorities to renew his contract. Kendell Geers, the internationally-renowned South African artist has weighed in: he will not join forces with Naidoo's sympathizers, and wishes to see him gone, based on what he describes as an bad experience working with the "unprofessional" Naidoo and the SANG on a failed Kendell's retrospective. Naidoo, having listed the museum's accomplishments during his tenure, threatens to fight for his job. But, given that this matter will quite likely become a flaming platform for racial politics in the post-Apartheid Rainbow Nation's art world, how it plays out calls for our attention.
Posted by Chika Okeke-Agulu at 10:23 AM No comments:

Formal art training in Africa began more than a hundred years ago either as a part of nationalist program of cultural development, or as an ancillary component of colonial education. In the wake of political independence by mid-20th century, new African states vigorously pursued autonomous national cultural programs, including the establishment new art and cultural institutions, or expansion and reorientation of existing, colonial ones. However, the Structural Adjustment Programs of the 1980’s and 1990’s severely impacted culture and education industries; in the ensuing turn to the so-called productive sectors of the devastated economies, art education for the most part witnessed dramatic decline in quality, scale and ambition. The symposium will consider how art schools in Africa might be reinvented and retooled to become sites of new trans-disciplinary pedagogical approaches and ambitious experimental projects and methods. It will also consider how to sustain the role of art schools as sites of knowledge production and sharing, research and archival practices and as catalysts for new strategies of international artistic networking.

The main objective of this second international symposium is to provide a platform and opportunity for examining artistic pedagogies and practices, institutional policies and traditions, and how these contribute to the production, transmission and perpetuation of artistic and visual knowledge in African academies. Participating thinkers, faculty, artists, and cultural practitioners working in the educational and academic field will reflect on crucial and urgent matters relating to systematic revitalization of artistic education in African countries. Invited participants will provide analyses of the current situation as well as articulate possible futures for academic art teaching in Africa given the changing contours of national imaginaries and the shifting global economic and political landscape.

Among some case studies that will be presented during the symposium, particular attention will be given to the lack of funding that leads on the one hand to a steady decrease of the teaching quality as well as access to contemporary tools of artistic and intellectual production. One of the core aim of the symposium is to look closely at certain artistic and curatorial projects that influenced the formation of cultural connections among African countries and stimulated the rise of non-degree based workshops, artists collectives and related educational initiatives. How might art schools, despite their need to fulfil set curricular and academic mandates draw on the vitality of non-degree programs? What collaborative possibilities exist between formal and informal art schools, especially given the changing dynamics of the art world, the need for broadening the spaces of artistic, aesthetic and socio-cultural transaction and exchange in Africa?

The symposium will consist of closed and public sessions. Presentations and discussions will address following themes:

Attendance is open to a limited number of forty participants selected on the first come first served basis. Interested international participants are requested to contact the coordination for registration and travel information.


Raw Material Company is a not for profit center for art, knowledge and society. It is an art initiative unfolding within the realms of exhibition making, creative residencies, knowledge sharing, and archiving of art theory. It works to foster appreciation and growth of artistic and intellectual creativity in Africa.
Posted by Chika Okeke-Agulu at 5:12 AM No comments:

In early 2012, Professor Jean Herskovits, a well-known historian who has written much about Nigeria for nearly half a century, wrote a most interesting Op-Ed in the New York Times. Titled, "In Nigeria, Boko Haram is not the Problem," the good professor--to whom many governments and NGOs go for advise on Nigerian matters--not only announced authoritatively that "there is no proof that a well-organized, ideologically coherent terrorist group called Boko Haram even exists today," she went on to claim that the world was being misled by the media into thinking that the BH is anything more than a bunch of unformed, criminal gangs produced by incessant poverty in the Muslim north, and insensitivity of a Christian-led government. According to her, "Someone who claims to be a spokesman for Boko Haram — with a name no one recognizes [I guess "no one" refers to specialists like her] and whom no one has been able to identify or meet with — has issued threats and statements claiming responsibility for attacks. Remarkably, the Nigerian government and the international news media have simply accepted what he says."

Her final advise--which was later adopted in a letter to the then Secretary Clinton by a bunch of US-based specialists, including Herskovits--was that the Obama Administration must not declare the BH a terrorist organization, and that the US must not wade into a "Nigerian war on Terror." Fine.

BUT,  Professor Herskovits, in the wake of the large-scale murders of school children (in secondary and tertiary schools) in Born0 State before and since you wrote your Op-Ed, and considering the present abduction of nearly 300 school girls, all claimed by Boko Haram through their leader who you doubted his existence in 2012, what advise do you and your fellow Nigerian specialists have? Is the Boko Haram now a problem, in Nigeria? Do you now recognize or know the name Abubakar Shekau who has been leading BH since 2009?
Posted by Chika Okeke-Agulu at 4:54 PM No comments: 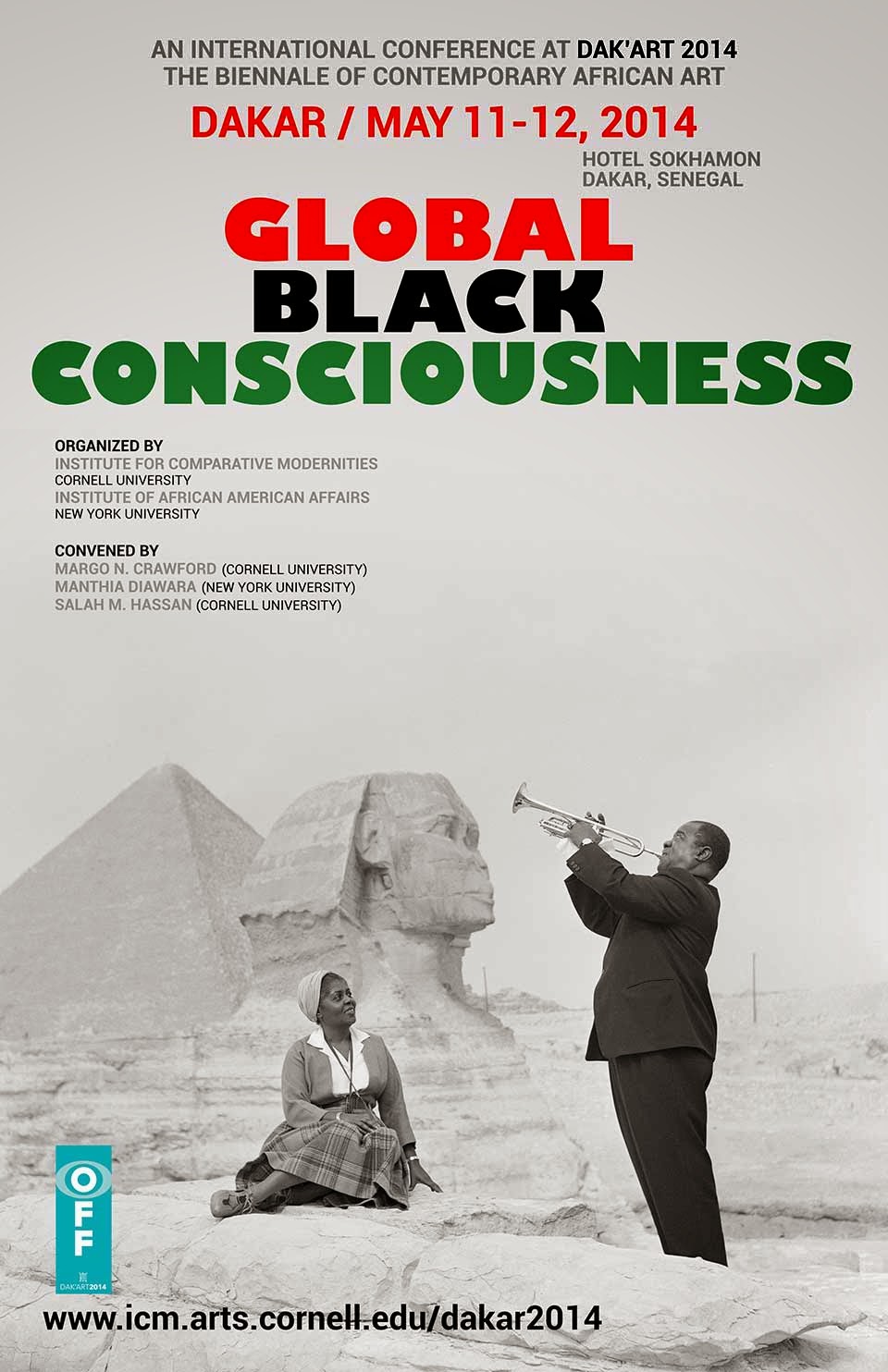 Free and Open to the Public. To attend, RSVP to Ms. Alexis Boyce at: ab449@cornell.edu.

The Institute for Comparative Modernities (Cornell University) and the Institute of African American Affairs (New York University) will hold the international conference “Global Black Consciousness” on May 11 and 12, 2014, in Dakar, Senegal.  The conference is coordinated by Margo Natalie Crawford and Salah M.  Hassan (Cornell University) and Manthia Diawara (NYU). The conference will coincide with the opening days of the Dakar Biennale (Dak’Art 2014), which opens on May 9, 2014. The two-day gathering will focus on the theme of “Global Black Consciousness,” with invited participants who will present new and unpublished work.

THEME/CONCEPT:
Now that we have such tremendous scholarship on particular identities shaped by the African diaspora (Afro-German, Black British, African American, Afro-Latina/o, Afro-Caribbean, and many more) and tremendous theories of the value and limits of Pan-Africanism, Afro-pessimism, and many other “isms,” how do we create a space for the critical and nuanced analysis of global black consciousness as both a citing of diasporic flows and a grounded site of decolonizing movement? This multi-event and multi-site conference aims to explore the confluence between theories of diaspora and theories of decolonization. Moreover, the crisscrossing of visual art, literature, film, and other cultural productions will be explored alongside the crosscurrent that shaped the transnational flow of black consciousness. The scholars participating in this conference will situate their work in the space of the crisscrossing that occurred as the Black freedom struggle became a layering of locations and dislocations and past, present, and future.

The 1960s and 70s will be our pivot point as we think about the precursors and legacies of the 1960s and 70s black freedom struggles. From May 9 to June 8, 2014, Dak’Art, la Biennale de l’Art Africain Contemporain, will be held in Dakar. The theme and the occasion allow us to revisit major Black and Pan-African intellectual movements and festivals (such as the Dakar's Festival of World Negro Arts of 1966, Algiers of 1969, and FESTAC 1977 in Lagos, Nigeria, among others) in addition to revisiting individual artistic and intellectual work tied to Africa and the African Diaspora.

As a keynote event, there will be a screening of Manthia Diawara’s film Edouard Glissant: One World in Relation (2010), on the Martiniquan philosopher and poet Edouard Glissant.

The conference’s papers will be published in a co-edited volume entitled Global Black Consciousness. We aim to gather scholarship that opens up and complicates the key paradigms that have shaped the vibrant work on theories and cultural productions of the African diaspora. This conference aims to push the abundant current scholarship on the African diaspora to another dimension—the edge where we think about both the problem and promise of mobilizing “blackness” as a unifying concept. This conference (and by extension the book) brings together literary scholars, historians, visual art critics, and diaspora theorists.

For paper abstracts and biographies of participants, please visit: www.icm.arts.cornell.edu/dakar2014

Posted by Chika Okeke-Agulu at 10:13 PM No comments: