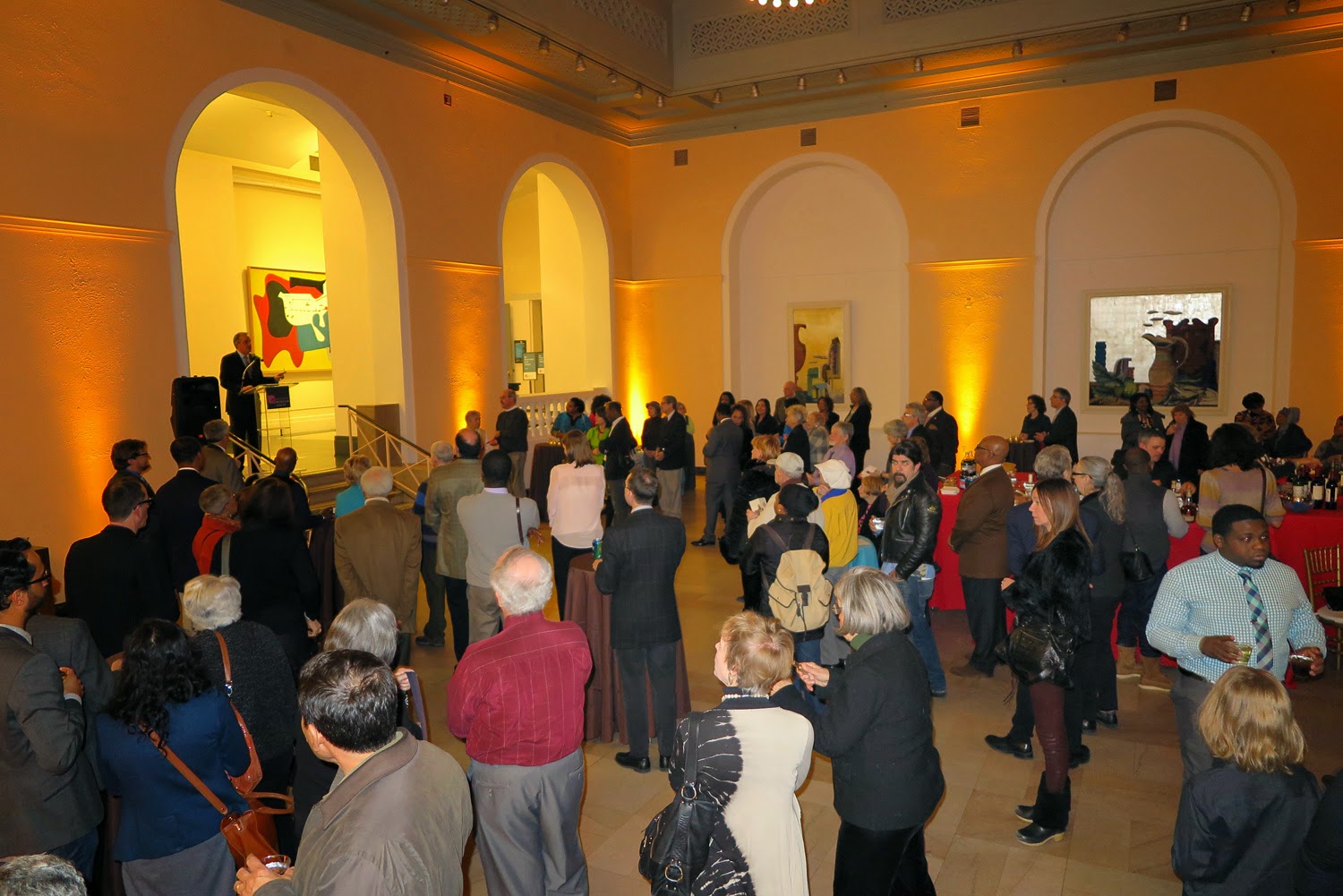 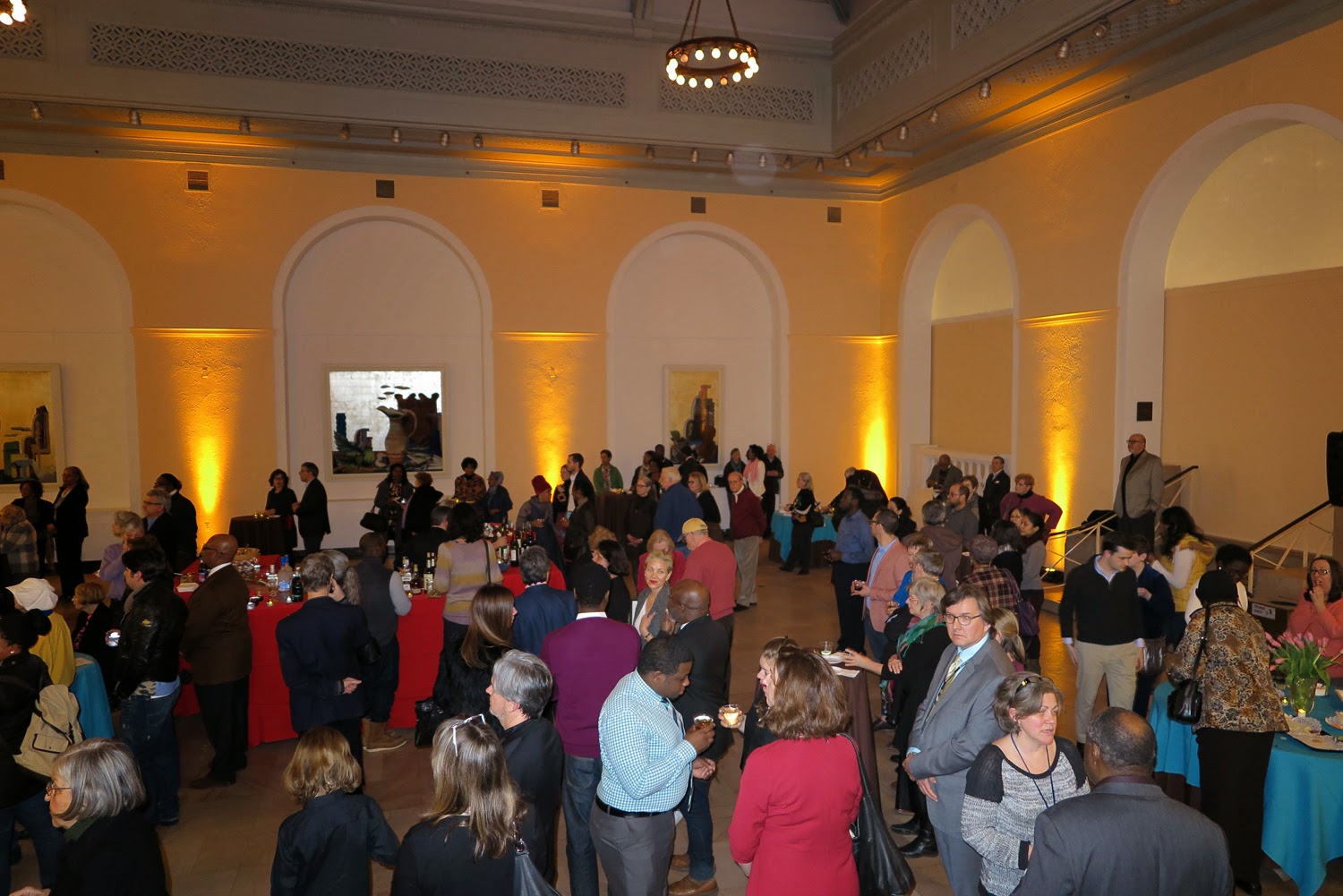 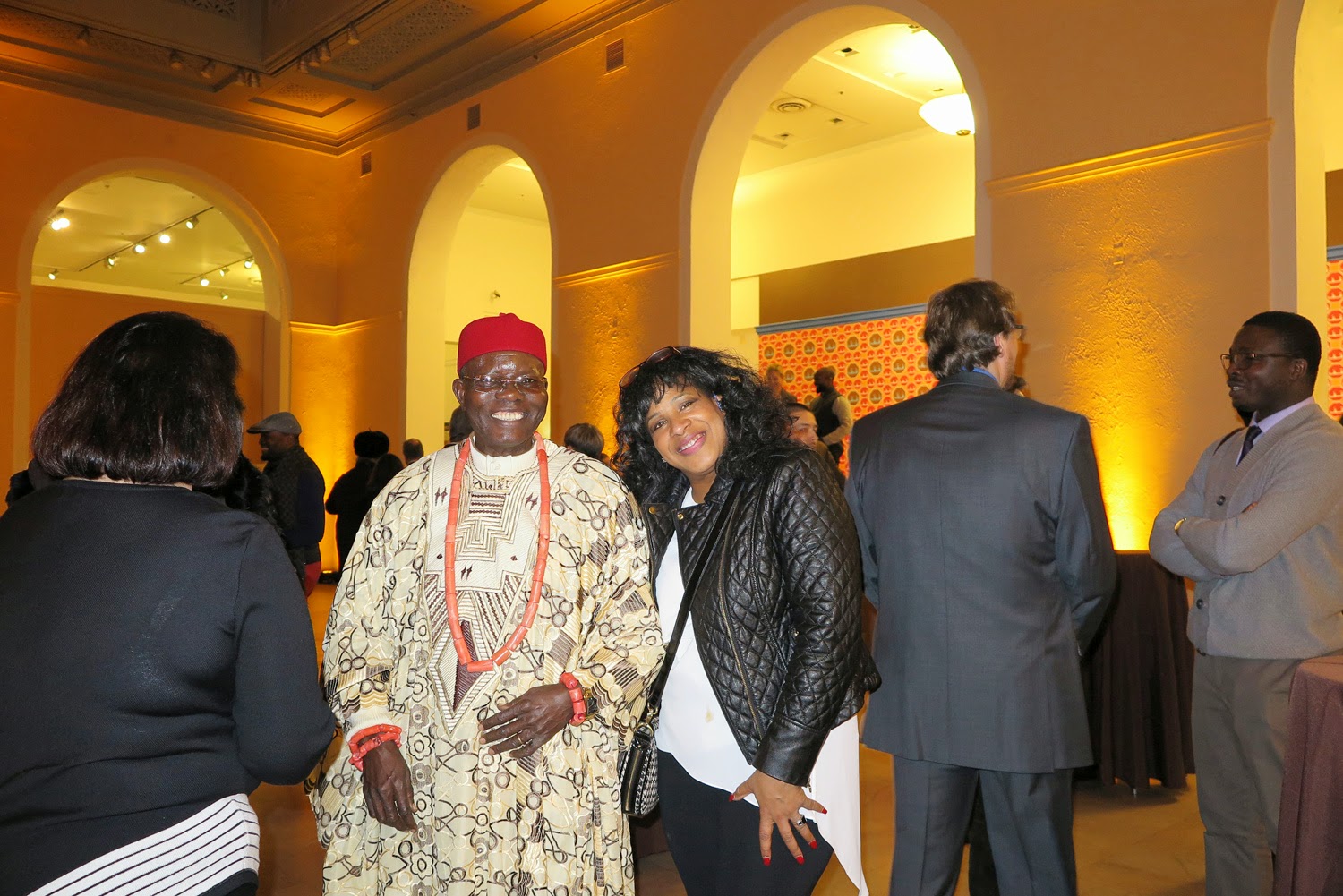 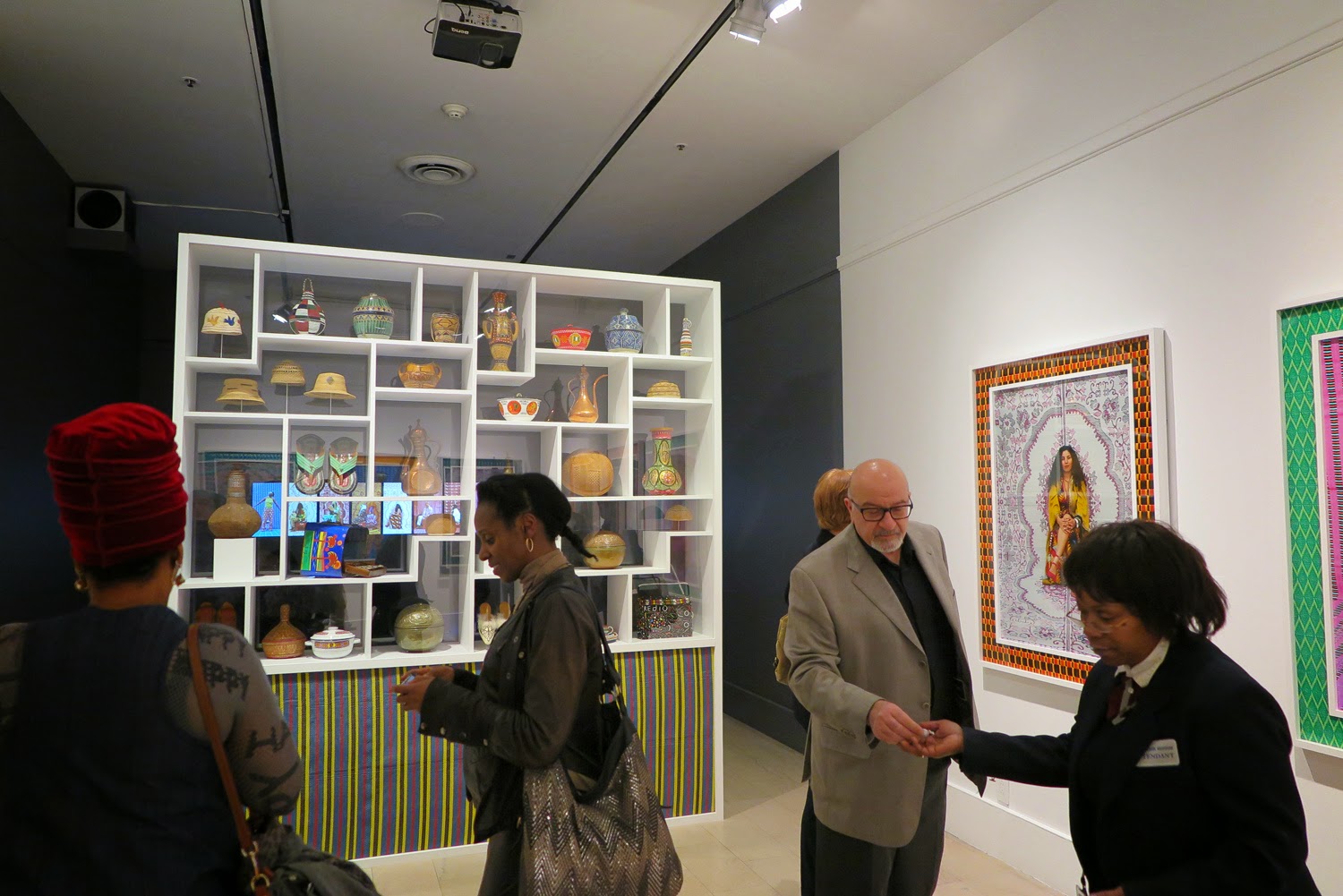 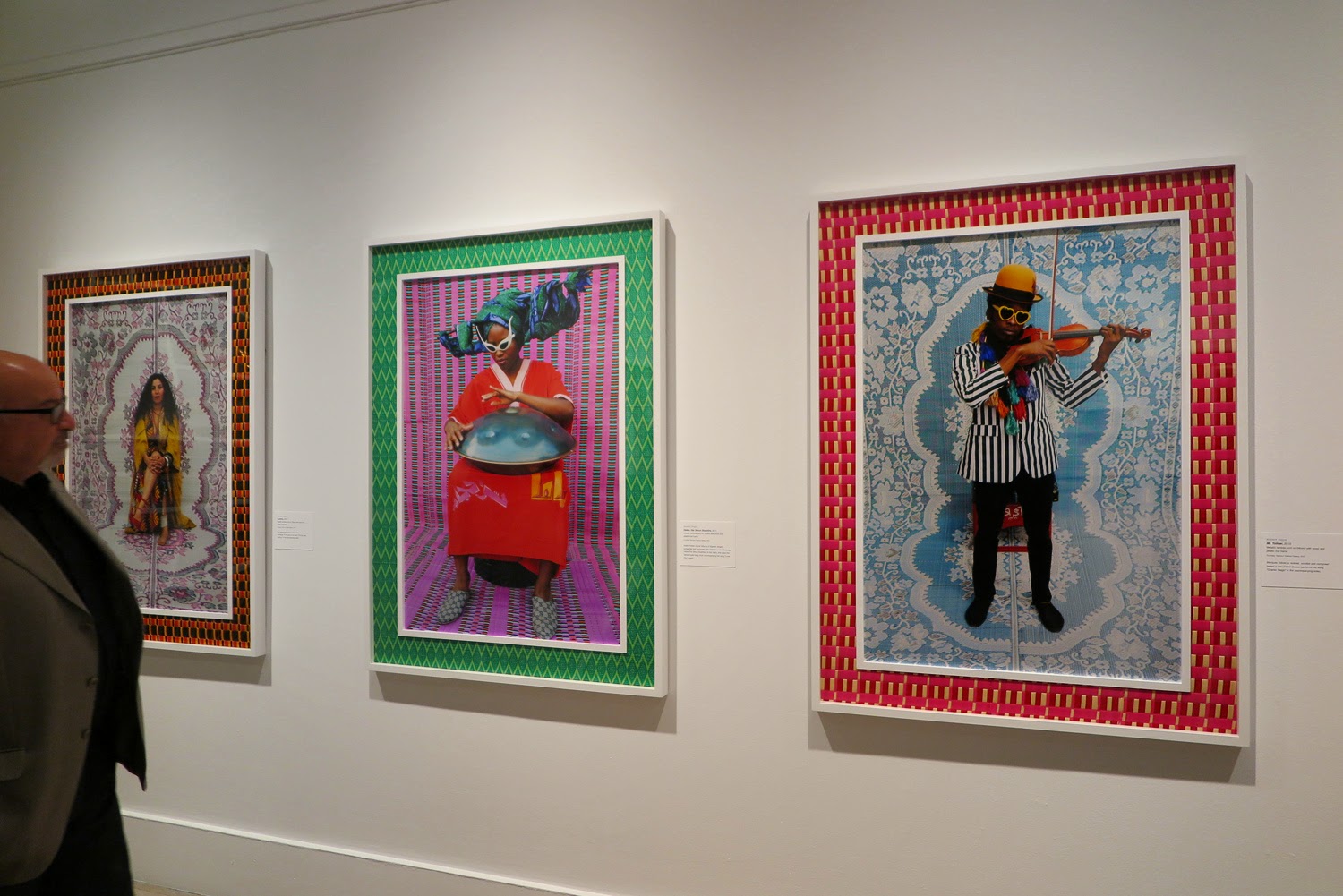 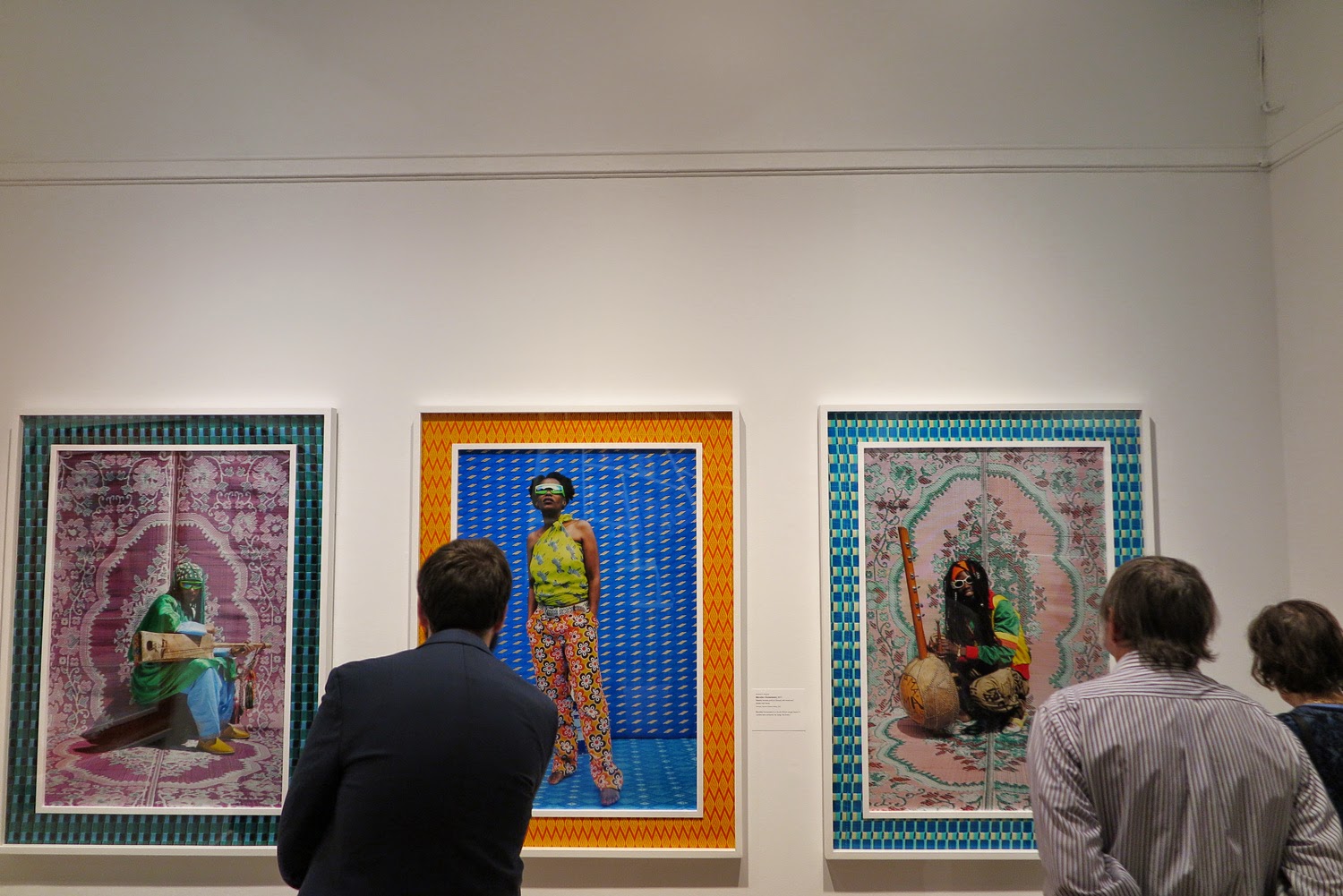 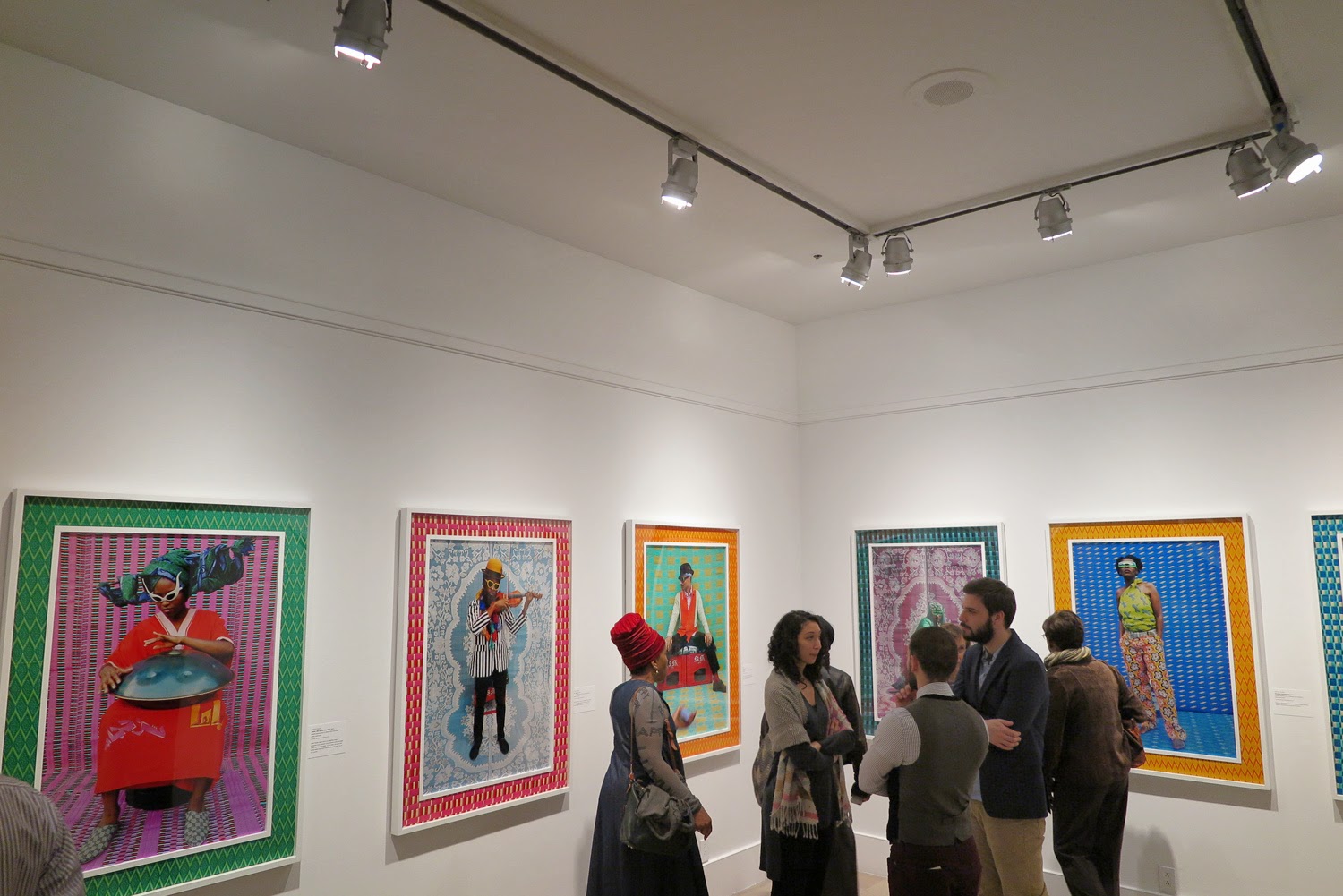 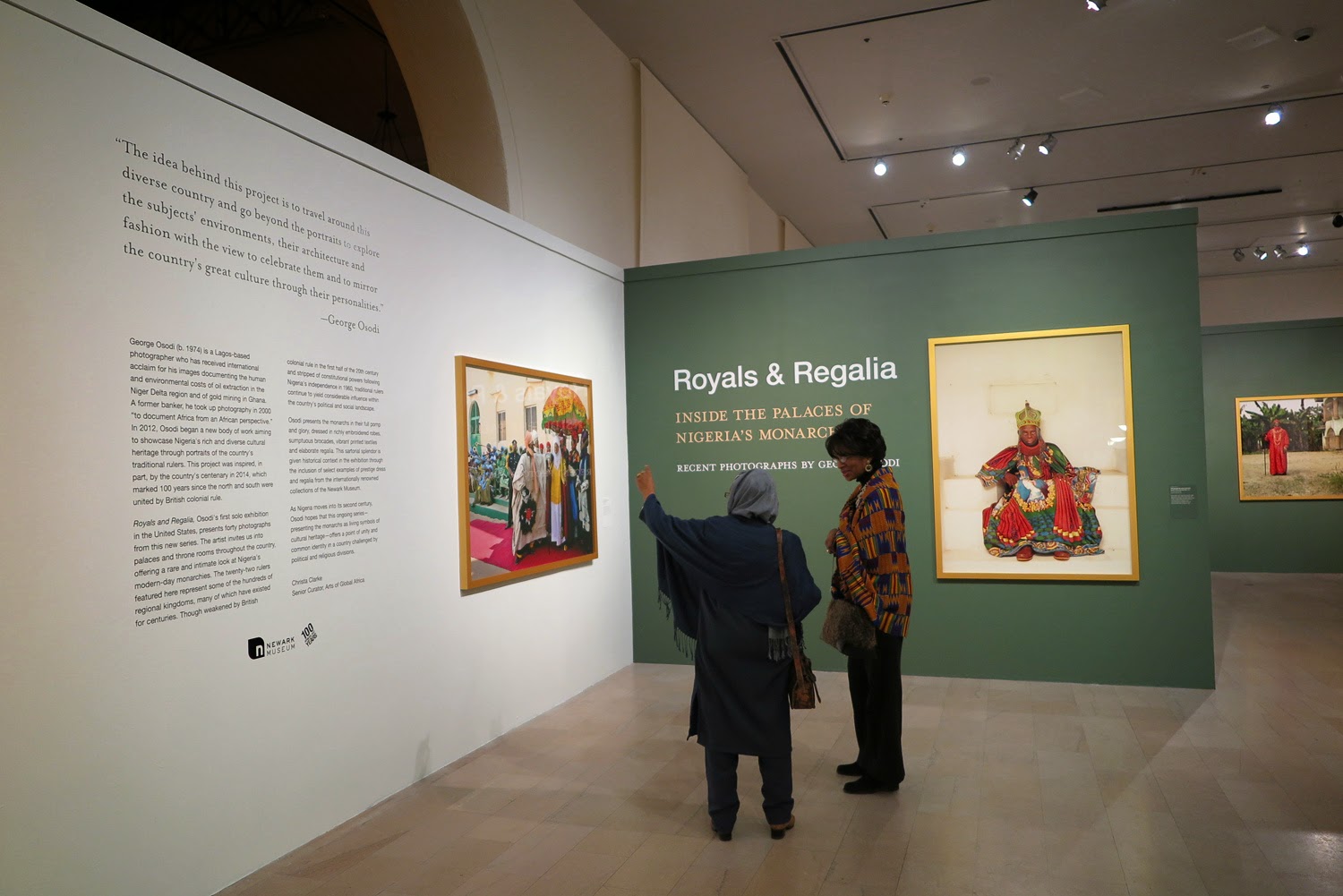 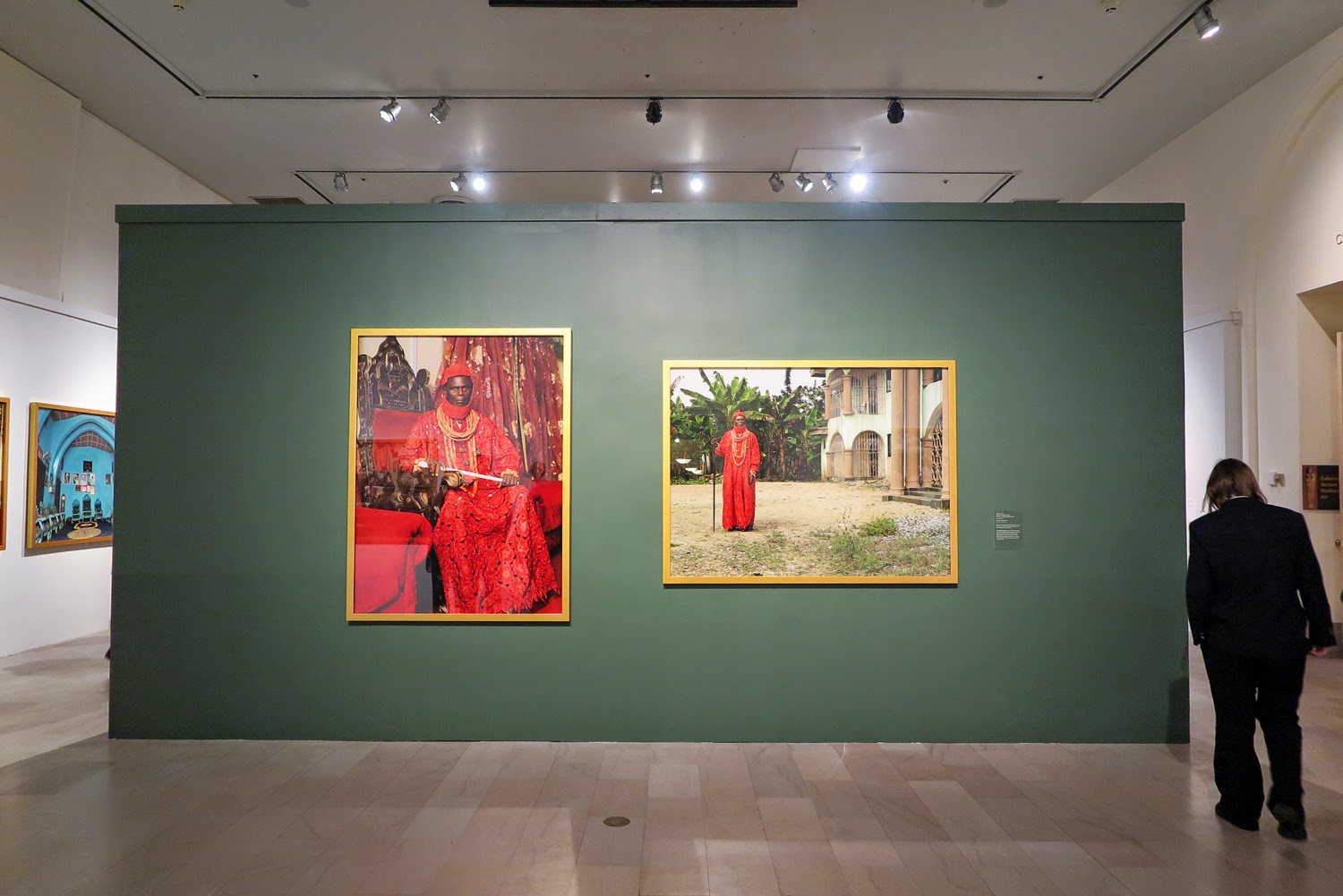 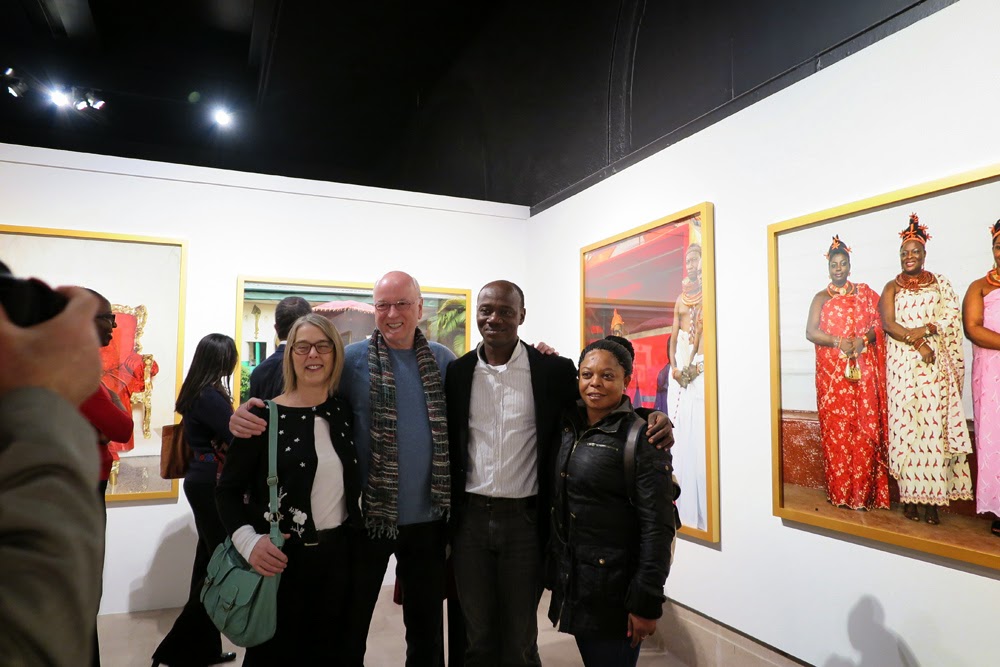 Posted by Chika Okeke-Agulu at 5:18 AM No comments:

Nigerian National Gallery of Art and the Abuja Biennale

In March of last year (2014), news came that the Nigerian National Gallery of Art (NGA) had established something it called the Abuja Biennale that would open in 2015. The whole matter seemed strange, if not funny, because I tried mightily to find some useful information about this biennale, and all I could find was announcement about the launching of the biennale’s logo! Nothing about the venue, exhibition dates, and any specific calendar of events leading up to the exhibition that was apparently only just a year away. What were these people drinking?, I thought to myself. But then, was this surprising? Unfortunately, no.

You see, the NGA, this vast government parastatal, with branches in, I think, all the 36 States of Nigeria has had a history of establishing projects that are at best questionable, at worse ridiculous—to the utter disappointment of those within and outside Nigeria who expect Africa’s giant to also live up to expectation when it comes to the business of art. Besides the embarrassing fact that the Gallery does not have a decent art space, that is to say real gallery, of its own, it has produced such underwhelming projects as something it called ARESUVA (African Regional Summit and Exhibition on Visual Art) and Art Expo, both of which were ramshackle art exhibitions even the most sympathetic critic would have been at pains to describe as befitting of the national art museum of any self-respecting country. Thankfully, both are now rested. And the current NGA administration seems to have stopped participating in the kind of fourth-rate temporary exhibitions overseas that I complained about some years ago.

In fact, the Biennale announced last year was meant to replace the ARESUVA established by the last NGA administration. And because the two editions of ARESUVA were such sorry attempts to present Nigeria’s own international art gig, its cancellation was good riddance. Nothing like the sense of loss most folks felt about the elimination of the Johannesburg Biennale after its 1995 and 1997 editions. Truth be told, I was quite thrilled to hear that the NGA had decided to kill off ARESUVA, since for me it was a badly conceived idea—something about using art to realize the goals of African Union’s New Partnership for African Development (NEPAD)—that could never have resulted in a serious contemporary art event. Moreover, the NGA did not seem to have any clue about what it takes, in terms of infrastructure and logistical support, to organize an exhibition that might feature any art worth its name, from within and outside Nigeria. Anyway, with the news about the inaugural Abuja Biennale, I thought that maybe finally, the NGA had done its homework, perhaps gone to Dakar to study how they have managed to organize Dak’art for the past twenty-something years. But that was wishful thinking on my part, as the information about launching the biennale’s logo quickly suggested to me that this was more likely Nigerian business as usual. It was clear from news reports that the NGA had not really thought about the Biennale model it wished to adopt, which would determine what kind of event they had in mind. Was it going to be based on national pavilion model, as do Venice and Cairo; or on curated/themed model as do Dakar, Gwangju, Havana, etc? And what about the idea touted by the NGA that the biennale would provide artists opportunity to SELL their work? Really? Since when did artists sell work at international art biennales? Or was the biennale actually a commercial ART FAIR, like Freize, Cape Town, Art Basel? Such basic outstanding questions about an event scheduled less a year away and for which we only had a mere logo? That's why it seemed to me that one could not possibly take the idea of a First Abuja Biennale in 2015 seriously.

So, when this past week I learnt that the Abuja Biennale is likely toast, no thanks, apparently, to the recent decision by the Nigerian government to merge the long-established national antiquities museum (the Nigerian Commission for Museums and Monuments) and the NGA, I thought, yep, how so sad, this open demonstration of disregard for the value of fine art, despite the achievements of Nigerian artists at home and overseas since the country’s birth in 1914. Although the merger should not necessarily imperil the biennale, if it was well conceived in the first instance, joining these two institutions all but guarantees that the decades-long clamor for the building of a permanent and befitting national art gallery or museum in Nigeria will not be heard by bureaucrats and politicians whose ears are completely jammed with fetid wax. And because the NGA as an autonomous parastatal has never quite lived up to its mandate and has virtually failed to meet the expectations of the Nigerian and international art worlds, if its merger with the more respectable NCMM means its further disappearance from our collective dream, one might not even miss it, just as I don’t miss ARESUVA.


Let’s simply stop thinking that the NGA or any national/state government institution will ever take the initiative, or play any important role in the development of real and functional art museums in Nigeria, or that it has the capacity to organize biennale-type art exhibitions, as Senegal, Egypt Algeria, and Morocco have done.  We must look elsewhere, to the still untapped yet increasingly robust private sector for leadership, to help change what remains a national embarrassment.
Posted by Chika Okeke-Agulu at 11:23 AM No comments:

I am still bristling, as are many Nigerians. about the cynical, desperate attempt by the government of Goodluck Jonathan to remain in power, when seeing the damning and devastating writing on his wall, he decided to postpone elections there were scheduled a long time ago for February 14. We are told that the reason for the postponement is to allow the Nigerian military focus on defeating the Boko Haram terror merchants in the next six weeks. This is a government that has shown absolutely no interest and capacity to fight this menace; a government that stuffed its ears against global clamor for something to be done to bring back abducted girls from Borno State; a government that has allowed these terrorists take over vast areas of Northeastern Nigeria, while the president is busy fattening his friends with Nigeria's oil; a government that has more or less left the task of confronting BH inside Nigeria to neighboring countries; a PDP party that has shown such political arrogance that has done nothing but breed an unprecedented culture of impunity and official corruption; a government and party that deployed soldiers to states in order to rig elections. In fact it has become self-evident that the reason for the postponement of the election is that the soldiers the ruling party needs to rig elections are just now busy fumbling around the Northeast, playing hide and seek with the terrorists. Given the massive deployment of soldiers to Ekiti State last year, to help the current governor rig elections, as the Ekiti Tapes, now reveal, is it any surprise that the government will need most of the Nigerian army to replicate the same criminal feat in all the 36 states?
The elections have now been postponed for six weeks; but the questions for Nigerians is this: what should be Goodluck Jonathan and his party's payment for dragging Nigeria to the precipice, just to maintain the culture of corruption that is their legacy, and for bring nothing but Badluck? What will be their reward for the egregious attempt to damage the fragile democratic dispensation the viability of which is directly related to Nigeria's survival? Should he and his party be compensated with another four years in power? No, I don't think so!
Posted by Chika Okeke-Agulu at 10:05 AM No comments: