Workshop for Emerging Africanist Scholars based on the Continent

The African Studies Review (ASR) convenes Pipeline for Emerging African Scholars (PEAS) Workshops, in collaboration with the African Studies Association of Africa (ASAA http://www.as-aa.org), to stimulate, solicit, and further develop high-quality journal submissions from Africa-based scholars under the close mentorship of senior Africanists from the continent and beyond. In collaboration with the ASAA the ASR will sponsor a PEAS workshop at the University of Ghana, Legon, on October 11, 2017. Scholars who wish to submit a proposal are, ideally, post-doctoral researchers, newly minted PhDs with works-in-progress currently underway, and soon-to-submit Ph.D. students. Emerging scholars will have an opportunity to work closely with senior scholars to re-work a pre-circulated draft article.

The broader goals of PEAS are:

Submission Process:
Applicants for a PEAS workshop must prepare the following BY JULY 31, 2017:
The entire dossier shall be compiled as a single PDF file and submitted by email to ASAA Conference Secretariat asaaconference@gmail.com with ASR PEAS workshop in the subject line.

Selection Criteria:
Applicants selected for participation will be notified by the ASR’s Managing Editor after confirmation of the applicant’s ASAA registration, by SEPTEMBER 1, 2017.
All successful applicants shall receive the following:
Applicants are responsible for their own travel and all other costs incurred. However, limited funding for travel within the continent courtesy of the Royal Air Maroc, and accommodation courtesy of the African Studies Association (USA) is available. Priority will be given to applicants from under-resourced institutions.  Women are particularly encouraged to apply.
General queries may be directed to Kathryn Salucka kathryn@africanstudies.org or Benjamin Lawrance bnl.rit2011@gmail.com with ASR PEAS workshop in the subject line.

Thank you to CAAS/ACEA for assistance in French translation. Please consider attending the CAAS/ACEA annual conference at Queen's University, Kingston, Canada, May 4-6, 2018. Details to be announced shortly on http://caas-acea.org/conference/annual-conference.
Posted by Chika Okeke-Agulu at 12:14 PM 2 comments:

Last month Sotheby’s announced the launch of a new and exciting initiative that we feel will bring great benefit to the wider arts community: The Sotheby’s Prize for a ground-breaking exhibition.

This is an annual prize to support and encourage ground-breaking, thought-provoking museum exhibitions and curatorial initiatives. Extending up to a maximum value of $250,000, the prize will be available to institutions, curators and museum directors with ambitions to realize trailblazing, potentially landscape-changing, projects in the cultural field.

Nominees and the inaugural winner will be determined by a jury of esteemed art world figures representing a broad spectrum of cultures and disciplines, including: Sir Nicholas Serota (Chair, Arts Council England), Connie Butler (Chief Curator at the Hammer Museum in Los Angeles), Okwui Enwezor (Director of the Haus der Kunst Museum in Munich) and Donna De Salvo (Senior Curator at the Whitney Museum of American Art in New York).

If you would like to learn more about the new Sotheby’s Prize and how to apply then please look through this dedicated page. Please note that the application deadline is 9am (EST) on July 24 2017. We can only consider applications received in the standard format with all sections complete.

If you have any queries please email prize@sothebys.com.
Posted by Chika Okeke-Agulu at 11:07 AM No comments: 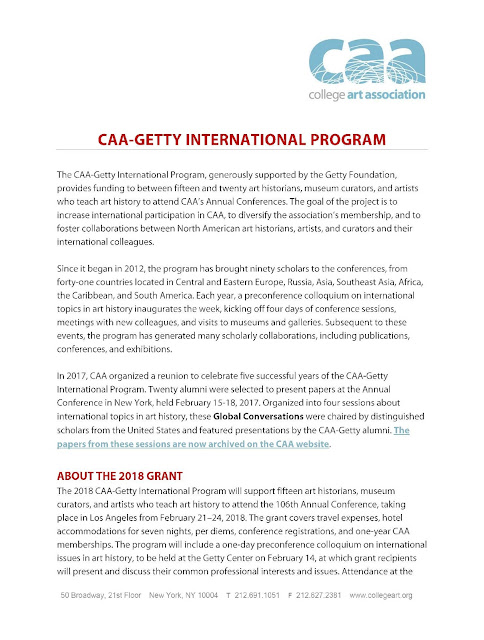 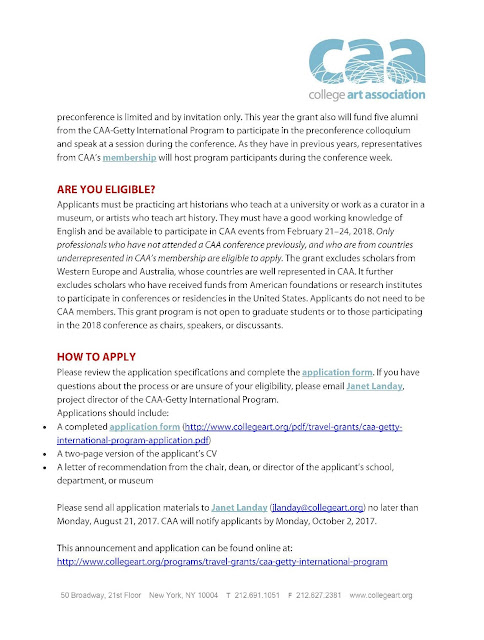 Posted by Chika Okeke-Agulu at 1:36 PM No comments:

The Institute of Art History at Freie Universität Berlin will be awarding the first Alfried Krupp von Bohlen and Halbach PhD Grant for dissertation projects in the field of African art history. Applicants are invited to submit PhD proposals focusing on historical and tradition-based arts including their repercussions into the present art scene. The research may be designed as co-operation projects with museums or important private collections in Europe as well as in Africa.

The successful candidate is expected to hold an excellent Master’s degree in African art history or related disciplines and show proof of academic excellence. He or she is expected to present an innovative dissertation project which can successfully be completed within the three-year grant period. Research experience in Africa as well as publications or exhibition projects are welcome. The grantee will take up residence in Berlin throughout the grant period and participate in the activities of the Institute of Art History.

Applications are invited from students of all nationalities. Non-native German speakers should show German language proficiency of at least C1 level.

The grant will initially be awarded for three years, with an option of a six-month extension. The monthly grant rate is € 1.300. Research stays in African countries are encouraged and supported for six months or less with an additional allowance of up to € 1.000 per month.
Application documents:


Complete application documents (including the Master’s thesis) must be sent electronically in the form of PDF documents to: kunstafrikas@zedat.fu-berlin.de


Later this month, the work of Frank Bowling, one of the most important painters of the 20th century, will be presented in an incredible exhibition at the Haus der Kunst, Munich. This show, Frank Bowling: Mappa Mundi is curated by my brotherfriend and colleague Okwui Enwezor who has, more than any curator working today, organized some of the most sophisticated and paradigm-shifting exhibitions the modern/contemporary artworld has ever seen. This survey of Bowling's magisterial map paintings, shows why Bowling ought to have been positioned at the forefront of postwar painting, rather than as part of its marginalia. From what I have seen of its preparation, it is impossible to not ask how come this artist and his art had not been given a full-fledged exhibition by the same big time US and British modern art museums that fawn over white artists with half of Bowling's majestic painterly talent and accomplishment. I guess that's why Okwui's work in Munich and elsewhere matters.

I will be seeing the exhibition later this month, and will hopefully write more on it. Here below is the information about it, from the Haus der Kunst press room.

With "Frank Bowling: Mappa Mundi" Haus der Kunst presents the most comprehensive overview the work of Frank Bowling (born in Bartica, British Guyana, in 1934) ever received.

In the aftermath of World War II, as part of the momentous wave of Anglophone West Indian and Caribbean populations that migrated to England, Frank Bowling left his native country at the age of 19, arriving in London in 1953. Later he would study painting at The Slade School, and Royal College of Art, distinguishing himself - next to David Hockney - with the silver medal for painting in RCA's 1962 graduating class.

Starting in the mid-1960s, Bowling began to surpass the rigid geometries of the pictorial field. The decisive moment of Bowling's artistic maturation was his move from London to New York in 1966. New York had produced postwar abstract painting of a certain scale and ambition. Bowling's painterly experimentation led him to consider how abstract painting could be invested with social, cultural, and personal meaning without losing the essential and formal principles still open to the medium.

The seminal "Map Painting" series would preoccupy him from 1967 to 1971. With this series, he began to summon some of the sociopolitical changes and radical cultural forces that were reshaping Western postindustrial society into his pictures. At the same times, the series expressed his understanding of identity. As a humanist and internationalist, being an artist of African descent born under colonial conditions in South America and living in New York, the topic had its complexity, more so in the high tide of the Black Power movement of the late 1960s. The image and representation of the map - for example, South America in "South America Squared" (1967), became a metaphor in Bowling's work of home and exile. He developed a chromatic repertoire of dazzling colors and muted tones, of contrapuntal layers that evoked evanescent seascapes, geological landscapes, and liquefied magma.

As an essayist (for Arts Magazine among others), Bowling played an active role in the debates of institutional exclusion and media marginalization of black artists. In his paintings and writings, he opened a pathway toward the reconsideration of space and territory. It compelled him to tackle the idealism of mapping journeys and voyages of discovery upon which the colonization and domination of space occurred.

"As when first made, today these paintings remain unparalleled pictures of astonishing physical power", says Okwui Enwezor. "The imposing presence of Bowling's paintings, with their mists of muted colors and scumbled fiery substrates, evokes feelings of vast oceanic presence." Water was the omnipresent element in the artist's biography: From the marsh flats of British Guyana, where Bowling was raised; to the undertow of the Caribbean Sea that he sailed to escape the island existence; from the River Thames in London, to the hubbub of New York, where he honed his artistic voice.

Besides the "Map Paintings", objects-cum-paintings from the early 1980, the series "Great Thames", "Bartica Flats" and "Wintergreens" are on display, too. Material from the archives, such as the extensive correspondence with the eminent modernist critic Clement Greenberg, exhibition catalogues, reviews, and photography sheds light on Bowling's participation in the Black Arts debates in New York in the late 1960s and 1970s.

"Frank Bowling: Mappa Mundi" is curated by Okwui Enwezor with Anna Schneider. The exhibition is organized by Haus der Kunst and will travel to the Irish Museum of Modern Art (IMMA), and to Sharjah Art Foundation.

The catalogue is published by Prestel, edited by Okwui Enwezor, with contributions by Frank Bowling, Okwui Enwezor, Rose Jones, Kobena Mercer, Anna Schneider, Zoe Whitley and Lynette Yiadom-Boakye; English, with German booklet, 288 pages, 23 x 28,9 cm, hardcover, 49.95 €.
Images are available on our download area.
If you have further questions, please do not hesitate to contact:
Elena Heitsch