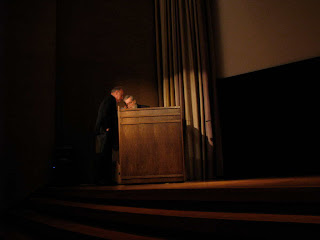 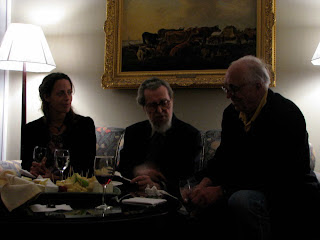 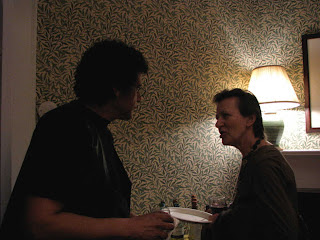 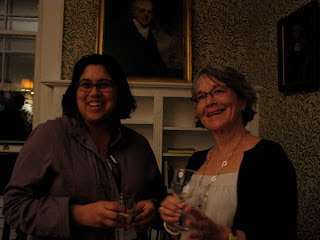 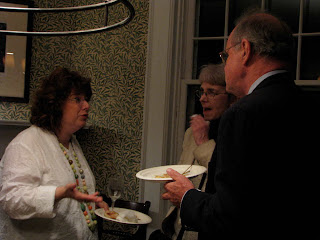 One of my favorite sequences in his case studies (which included Rauschenberg's Bed, Max Ernst's The Virgin Chastising the Christ Child before Three Witnesses, and two of Michelangelo's canonical works, Creation of Adam, and Last Judgment) is when he suggested that centuries-long interpretation of The Last Judgment as a visual epic of Apocalyptic damnation was based not so much on the free-thinking period of the 1530s (when the work was created) and Michelangelo's references to complex medieval sources as on later ecclesiastical orthodoxy. So, looking at Saint Sebastian(?)--seen in the painting clutching several arrows and no bow with a rather benign countenance, but which generations of scholars say is menacing the damned souls beneath him-- he says, is like looking at John Wayne playing with a few spent bullets, without any gun! The angels at the top left corner who are supposedly carrying Christ's Cross--the burden of it!-- are, Steinberg says, actually playing with it. So, looking at the angels after the lecture they now seem like fawners, and inebriated bacchae. Or when he suggested that The Creation of Adam is a "romance of young love," given that even though Adam is limply reaching out to God the Father, his gaze, in other words his attention, is focused on Eve who longingly reciprocates; it as if they see God as--come to think of it--a meddling parent!
Anyway, Steinberg is my favorite art historian, and I know it because for once in a long time (please don't ask how long, because I am still figuring out how time works) I did not doze off listening to an art history lecture.
Posted by Chika Okeke-Agulu at 7:04 AM 4 comments:

"Spirit of Dialogue" by Chris Okonkwo

A Spirit of Dialogue: Incarnations of Ogbanje, the Born-to-Die, in African American Literature, has just come hot off the press from the University of Tennessee Press. The author is Chris Okonkwo, my longtime friend and, without equivocation, one of the sharpest literary scholars of my generation. His critical clarity and profound mastery of issues in African and African American literature and literary theory, is incomparable. And I recommend this book to anyone with serious interest in contemporary literature, but especially in the ways some crucial African concepts and ideas--in this case, the phenomenon of Ogbanje or Abiku--motivate and are insinuated in the formal style and narrative structure of work by influential African American writers. If I must entice you, here is a little detail from the publisher:

A Spirit of Dialogue focuses on the sometimes neglected and understudied works of four canonical African American writers: Octavia E. Butler's Wild Seed and Mind of My Mind, Tananarive Due's The Between, John Edgar Wideman's The Cattle Killing, and Toni Morrison's Sula and Beloved. Okonkwo demonstrates persuasively how the mythic spirit child informs the content and form of these novels, offering Butler, Due, Wideman, and Morrison a non-occidental “code” by which to engage collectively with the various issues integral to the history experience of African-descended people. The paradigm functions, then, as the nexus of a life-affirmative dialogue among the six novels, as well as between them and other works of African religious and literary imagination, particularly Things Fall Apart and Ben Okri's The Famished Road.
Posted by Chika Okeke-Agulu at 11:11 PM 1 comment: 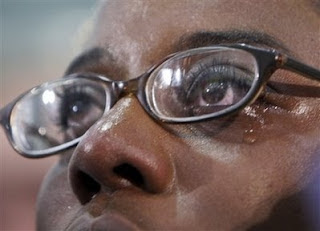 I came across this picture today and had to share it here. Because it says a lot about the candidacy of Barack Obama for the United States presidency. Although we know the name of the subject (since the AP photographer provided it), the close cropping gives you only few of the usual data by which you normally identify a person. As such what you see is the face of youth looking up toward tomorrow, a future that, as the mind conjures it, is so awesome, so powerfully within reach and yet...A future that has the power of assuaging the burden of history, of placing an assuring hand on shoulders wearied by not just the vicissitudes of the past, but by a present condition of growing anomie. Looking at the raised gaze and the lone tear at the edge of the eye makes my heart want to leap with joy of the most anxious type! And to ask rhetorically: what sight, beyond Mr. Obama, do these youthful eyes truly behold?
Posted by Chika Okeke-Agulu at 7:53 PM 1 comment:

This afternoon, I met a young man called Andre Rondon--a Brazilian-born American--in front of our neighborhood grocery shop here in Williamstown, MA. He was begging for money. I passed him by. On my way out of the shop, I noticed he had a placard on which was a map of Africa. Instinctively, I stopped to see what he was about. Well, Andre is part of the IICD network, and needs money to pay for his ticket and visa to Mozambique to work with an AIDS prevention initiative. What I saw in him, as he explained his motivation, is that zeal to change the world, which many have at a certain point in their youth, a passion that is usually unrealized, remaining only at the level of thought. What I saw in him also is the spirit only few have to operationalize that youthful passion, not by a flight of fancy, but by embarking on an act of faith, by deferring visions of self-comfort, to make a difference in the lives of the few. I do not know if Andre will get all the monies he needs to make the trip to Mozambique; nor do I know, if ever makes his journey, how many lives he will touch by his commitment. But, this afternoon, I saw in his eyes the future of humanity. Andre, it shall be well with you.
Posted by Chika Okeke-Agulu at 9:28 PM No comments: 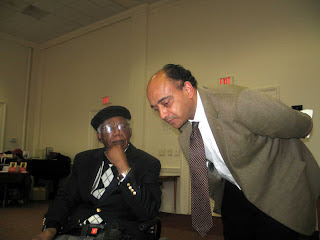 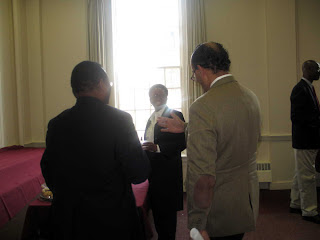 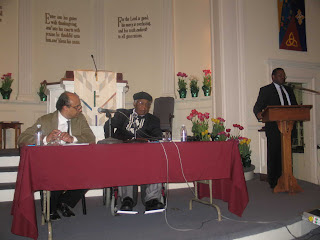 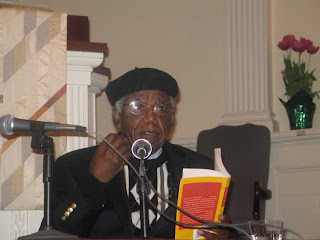 In the Q/A period, Achebe was asked about the state of contemporary Nigerian literature, whether there are any young writers he considers of promise. To which he responded that yes, indeed, there is important work coming out today. But he would not mention any specific names, because according to him, "it is not fair" to do so. You could almost hear in him the sentiments of a proud father of many accomplished children being asked in public to name his favorite child! Wisdom is an immense gift. The last question came from a twelve-year old boy who had just read TFA in his class asked the last question of the evening. He wondered if Achebe should be speaking, as he has, of Okonkwo as a "flawed hero", or is the novel a story of "rash and wise men," since to him Okonkwo did not so much cut the image of a hero as one of a rash man. I never thought of it that way, Achebe responded; but his people called him a hero.
Posted by Chika Okeke-Agulu at 7:09 PM 1 comment: