I have been reading with mild amusement about the so-called controversy surrounding the inclusion by the British artist Damien Hirst of a golden head made after the famous brass heads of ancient Ife Kingdom in southwestern Nigeria. He has been accused of "cultural appropriation" and the CNN has even featured this. Unsurprisingly, the charge is led by Africans. And Hirst's people have been forced to make a statement. Of course Hirst has built a career, a stupendous one at that, by courting controversy and delivering highly provocative work. So another controversy would be just part of Hirst business you might say.

But what is all the brouhaha about? What naughty game has Hirst pulled this time? What about the Ife head appropriation? What exactly did he do with this head? Did he copy and exhibit it as his own golden sculpture, in the manner of the Appropriation artists of the 1980s (Sherrie Levine, Richard Prince, etc) and after? And if so, wouldn't his critics have some point, just as people were riled up by the work of the Appropriation artists, some of the cases ending up in the court of law? 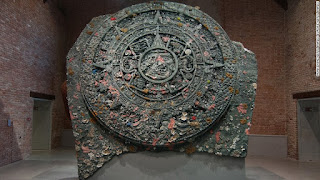 Actually, I doubt that most of the people who accuse Hirst of cultural appropriation have taken a look at his project, Treasures from the Wreck of the Unbelievable, in which we find the Ife-style head among numerous other sculptures made after ancient treasures from many cultures across the planet. For in this sprawling installation (btw, how does anyone find the money to put up such a show?!), there are objects and sculptures made in the manner of ancient objects and sculptures from Europe (Rome, Greece), Middle East (Minos, Mesopotamia), Africa (Egypt, Ife), Asia (Indus Valley, China, India) and the Americas (Olmec, Maya, Aztec, Inca), etc. You could say that he has gathered in this exhibition examples of the world's ancient artistic and cultural heritage, all supposedly recovered from the wreck of a fictional Greek ship owned by a freed slave.
And by the way, there is a note accompanying the Ife-style head (see p. 23 of the exhibition guide), referencing the story of the German Leo Frobenius who, on encountering the Ife brasses in the first decade of the 20th century, claimed that they proved the existence of the lost, mythic, city of Atlantis (for in his estimation, only an artist as sophisticated as those from ancient Greece could have made the sculptures he saw in Ife). In other words, the Hirst project acknowledged the original ancient works from which he copied or adapted the objects in the Treasures exhibition.

So, my question to Hirst's critics is this: given the idea behind his project, would  you have been happier if he decided to NOT include any example from Africa (besides Egypt) in his list of the world's ancient treasures? Then, perhaps someone would have accused him of blatant refusal to acknowledge African contribution to the world's artistic heritage.

Just because an artist is called Damien Hirst does not mean we have to have a knee-jerk response to every work by him. Crying wolf this time makes no sense.
Posted by Chika Okeke-Agulu at 1:54 PM

I saw this in Venice - that is not how the head is described.

I saw this in Venice, the description accompanying the head itself which is what most people is different.