Africa World Initiative (AW) seeks a highly motivated and committed professional to join its office. The Assistant Director will work under the leadership of the Director of AW to support and establish African Research and programing on campus. The Assistant Director will oversee the administrative and logistical needs of this newly established unit. This position will be responsible for managing as many as five research hubs, budgets, communications, annual reports, Advisory Council meetings, web development, marquee events, fellowships, and research opportunities.

The primary purpose of the position is to facilitate the mission of AW as defined by its Director. The Assistant Director will provide excellent service to a variety of constituents (i.e., students, alumni, faculty, staff, and guests) while coordinating logistics, assigning and managing projects, and supervising and evaluating three or more AW staff members. The Assistant Director will develop, monitor, delegate and review specific projects and events. AW programs and activities on Africa range across science, technology, social sciences, arts and humanities, entrepreneurship and digital humanities.

This position provides a unique opportunity to positively impact a broad range of new and established programs and services offered by the African World Initiative. This role requires deep and current knowledge of University policies, and priorities to best represent the University and assist campus personnel and external partnerships engaging in Africa-related work. This position requires a proactive attitude with problem-solving skills.

Managing the AWI Administration and Logistics:

Provide leadership and supervision of staff members and fellows.

Act as a liaison to faculty and visiting faculty administration.

Oversight of the budget for AWI.

Producing annual reports for the Director of AWI.

Organizing the logistics for the advisory council, marquee lectures and conferences for AWI.

Manage relationship with PAS and PIIRS

Extensive knowledge about and experience with managing Africa-related program and initiatives in research universities or equivalent institutions.

Strong organizational and project management skills, analytical and problem-solving skills, and attention to detail partnered with the ability to think strategically.

Ability to communicate clearly, effectively, and persuasively, especially in writing.

Ability to build and maintain effective relationships; influence and persuade without direct authority; and establish collaborative partnerships within and outside the University.

Princeton University is an Equal Opportunity/Affirmative Action Employer and all qualified applicants will receive consideration for employment without regard to age, race, color, religion, sex, sexual orientation, gender identity or expression, national origin, disability status, protected veteran status, or any other characteristic protected by law. KNOW YOUR RIGHTS

Posted by Chika Okeke-Agulu at 10:26 AM No comments:

There is no question that the Repatriation Movement is heating up. The campaign for the return of African cultural heritage looted from the continent during the colonial era by rapacious agents of empire took decades to gain steam. Now there is no going back! Little by little, one crucial step at a time, led in significant ways by the government of Germany in Europe and the Smithsonian in the US. Those who think that this campaign will simply fade away, as did earlier ones, are in for a different reality: the campaigners are in for the long haul, and there is enough air in their lungs to keep calling out the defenders of Empire's crimes 70 x 7 years to come.

In the meantime, I appreciate the gestures and actions of colleagues and officials in France, Germany, the UK, and the US who have steered their institutions to commit to the return of looted artifacts in their holdings, like the staff at Horniman. This includes frankly folks at the British Museum who must have to deal with the politics of Britain's new culture-warriors-in-government, like its former Culture Secretary, Oliver Dowden MP who in this interview with BBC4 claims that he "loves Benin Bronzes", while defending, with a tremulous voice, why the looted Benin artifacts detained by the British Museum will not be returned.

Despite the position of these government types and their sympathizers in the art industry, one thing is certain. They are on the wrong side of history, stricken by the disease of colonial nostalgia. Time will tell.
Posted by Chika Okeke-Agulu at 5:12 PM No comments:

BBC has just created this fantastic podcast series called "Museum of Bad Vibes," with the first episode on "The Bird of Prophecy Staff," one of the more familiar objects that constitute the Benin Bronzes corpus found these days in museums that received artifacts looted from Benin City in 1897. In the podcast, the bronze staff speaks about its place in Benin society and its post-1897 imprisonment in the museum cabinet.

The Bird of Prophecy staff has been locked up in a box unable to speak and when finally given the chance, he tells the story of his former glory as a ceremonial symbol of pride for his people.

On this tour, Hanna Adan, with the assistance of experts, explores the history of the Benin Bronzes, from the Benin Kingdom. The sculptures include elaborately decorated cast plaques, commemorative heads, animal and human figures, items of royal regalia, and personal ornaments. They were created from the 16th century onwards in the West African Kingdom of Benin, which was part of the British Empire from 1897 to 1960, and is now part of Nigeria.

Through the eyes of the Bird of Prophecy staff, Hanna tells the story of the British Empire raid, the destruction that saw the kingdom crumble, and the dispersal of the famous Benin Bronzes around the globe.

Through this sonic museum tour we ask - what is the Museum’s duty towards contested objects of spiritual and cultural significance in their collections?

Produced and Presented by Hanna Adan

With story by George Bailey

Posted by Chika Okeke-Agulu at 12:00 AM No comments:

Chika Okeke-Agulu on the call for artistic expression and rise of Africa...

I interview from 2020 is one of my most biographic. Thanks to the guys at Luminary FM.
Posted by Chika Okeke-Agulu at 1:09 AM No comments:

Oxford Union Debates on Restitution of Looted Artefacts: May 12, 2022 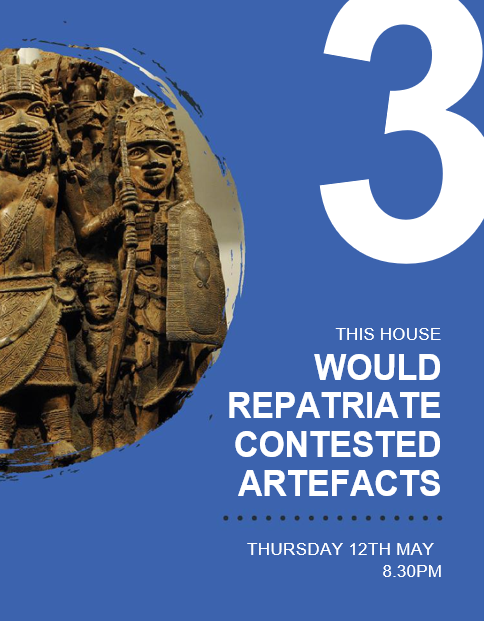 Whether the Elgin Marbles should be returned is a perennial question. Amidst increasing scrutiny of symbols of Europe’s colonial past, multiple states and the UN have called for the return of contested cultural property. From the Koh-i-Noor Diamond and the Rosetta Stone, to the Benin Bronzes and Moai Statues of Easter Island, British institutions are full of artefacts claimed by nations across the globe. This poses the question of whether it is time for museums to heed the calls to ‘wash [their] hands of blood and return’ everything. Can any country ever legitimately own artefacts of collective historic significance? Can modern states truly lay claim to their countries’ history?

Artist, curator, and historian specialising in African and African diaspora art history. He is Director of African Studies at Princeton University and was appointed as the Kirk Varnedoe Visiting Professor at New York University.

Director of the Hunterian Museum. He has previously served as Director of Heritage Collections at the University of Amsterdam, and has worked for the Ministry of Education, Science and Culture, and for the National Institute for Conservation in Amsterdam.

British actor, activist, broadcaster, comedian, director, and writer. He has repeatedly appealed to the British government for the return of the Parthenon Marbles to Greece. He has written in support of the #LostMyMarbles campaign on Twitter, and has expressed his wish to see the statues steeped in the ‘blue lights of Greece’.

Academic and former Director of the Walters Art Museum in Baltimore. He has curated a number of critically acclaimed exhibitions, provides consulting services to cultural clients and pursues projects at the intersection of the arts and sciences.

Posted by Chika Okeke-Agulu at 11:41 AM No comments:

The Princeton University Art Museum welcomes applications for an Assistant Curator of African Art. This two-year full-time benefits-eligible appointment will help shape the presentation of African art in new collections galleries in a new building designed by Sir David Adjaye, scheduled to open in late 2024. The curator will report to the chief curator and work in close coordination with the director, curators in other areas, designers, educators, faculty, and others.
The collection of African art at Princeton—growing regularly through gifts and purchase—includes excellent examples of masks, figures, and other works of art, with particular strengths in the arts of Western and Central Africa. In addition, African and African diasporic photography, modern and contemporary art, and works on paper are represented in the collection. The curator joins us at a dynamic time and will play a key role in the collections’ research, installation, and interpretation.
As part of broader efforts to present art in global, transhistorical contexts in the new building, the curator will develop checklists, conceptualize installation strategies, and produce didactics for African art, in collaboration with the chief curator, director, educators, and designers. The curator should be well versed in area scholarship and the latest curatorial and museological approaches in African art; they should also be able to tap into a network of specialists for expert consultation, as needed. The curator should have the experience necessary to facilitate the presentation of a range of artistic and community voices in the galleries. The ideal candidate will be able to complete deep object research, including provenance; will embrace the possibilities of an academic museum; and will communicate effectively with scholarly and diverse audiences. The curator will also contribute to new acquisitions, participate in collections-based teaching on campus, respond to collections inquiries, and work with conservators and registrars to address conservation and mount-making needs.
An advanced degree in art history or a related field is preferred, with strong knowledge of historic material and a minimum of 3 years' meaningful experience developing and implementing exhibitions and collections installations. Fluency in the ethical and legal complexities surrounding the history of the collection, display, and interpretation of African art is critical. Excellent communication and writing skills, including experience preparing didactic materials, are expected, together with a high degree of organization, self-motivation, and attention to detail. The salary range for an assistant curator is $70,000-$90,000.
To learn more, please visit http://artmuseum.princeton.edu. Interested candidates should apply at https://www.princeton.edu/acad-positions/position/25161.
This position is subject to the University’s background check policy. Contact Review of candidates will begin immediately and continue until filled.
Please direct all inquiries and nominations, including letters of interest and resumes, to, in confidence: Chris Newth Cnewth@princeton.edu Associate Director for Collections and Exhibitions, Princeton University Art Museum
Posted by Chika Okeke-Agulu at 12:51 AM No comments:

El Anatsui: The Reinvention of Sculpture, the Book! 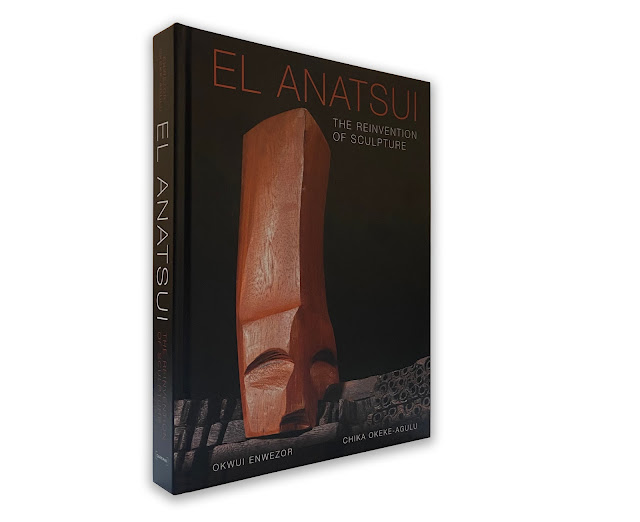 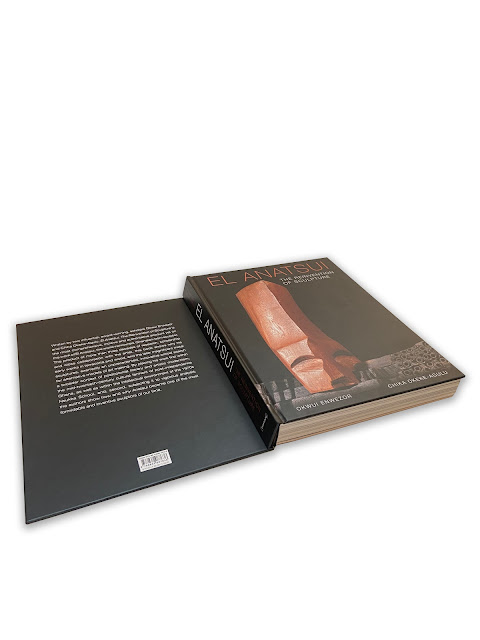 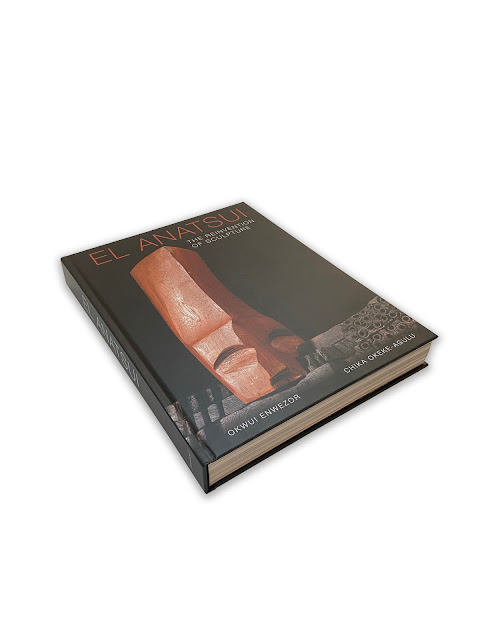 Posted by Chika Okeke-Agulu at 6:43 AM No comments: