In Azania tonight
A Songbird crashes, headlong
Into River Orange
And Silence rumbles
In the Waters of the Cape

In Azania tonight
A rainbow serpent unfurls
From the sky’s roof, and
A comet fizzles in the waters
Of mighty Limpopo

*Here is an obituary announcement in Art Times.

On the Millennium Tower, Abuja

Five years ago, I wrote about the white elephant project in Abuja called Millennium Tower recently commissioned by the Nigerian government at the cost of 53 billion Naira (about $450 million). I was miffed by the fact that this towering glass structure was being built in the name of "culture," when the Nigerian government has shamelessly ignored art and culture institutions--museums, galleries, music halls, and theatres--in its original and revised masterplans of the Nigerian Federal Capital city. Construction is still ongoing, and is expected to be completed in 2014. But just as with such projects in Nigeria, the construction cost of the Tower miraculously ballooned to more than 69 billion Naira, to the consternation even of the Senate Committee on the Federal Capital Territory. In any case, even if the Tower were completed tomorrow, the glare from its fancy glass walls will not blind anyone still looking for respectable houses of culture in Nigeria's capital city.
Posted by Chika Okeke-Agulu at 11:24 PM No comments:

African cities are both centres for artistic practice and hotspots of social articulations from enriching encounter to violent conflict. On the one hand, they offer artists opportunities to study, establish networks, and interact with social, political, economic and aesthetic aspects of urban life. On the other hand, they offer the stage where artists negotiate these very topics, bringing attention to the materiality, sociality and politics of urban space. However, the artists’ agency in the urban public and their modes of social as well as aesthetic interaction, vary to a great degree. They may search for social encounters through performances in public spaces; they may commhent on urban planning through independent or commissioned design interventions, or they may pull the city into their studio or workshop by processing the materials found in the streets.

This panel asks: How do artists in African cities situate themselves in the public? How do their art practices relate to particular urban situations and topics? What are the dimensions of social engagement through creative practice, and how do they relate to the urban space as a social and public sphere? What audiences do creative practitioners address, and how do audiences actually emerge? What does artistic practice contribute to an understanding of “the public” in the diverse
political and cultural urban settings?

The panel welcomes papers from a broad variety of disciplines including, but not limited to, art history, visual studies, anthropology, urban studies, performance studies, architecture, or design studies. Contributions by practicing artists are equally welcome.

I desperately need to contact the Nigerian artist Colette Omogbai who was active as a painter in the early 1960s. I believe she later made a career as an educationist in present-day Edo State. Any help? Please email me. Thanks!
Posted by Chika Okeke-Agulu at 5:13 PM 1 comment:

The School of Art and Art History at the University of South Florida invites applications for a tenure-track position with a specialization in art of any period in one of the following areas: African, Asian, Latin American/Pre-Columbian, or Middle Eastern/Islamic art.  Art historians working on any region and epoch in these areas, and/or relevant diasporas are invited to apply. Interest in global interaction and cultural exchange is desirable. Begin August 2013. Qualifications: Ph.D. or close to completion, high level of engagement in research,  promise of scholarly productivity, and excellent teaching ability. Candidates must be committed to  interdisciplinary investigation and initiatives. Demonstrated knowledge of critical theory is preferred. Teaching experience beyond graduate assistantships and scholarly publications preferred.  Typical responsibilities: Teach two classes per semester in area of specialization and supervise M.A. theses, maintain active research agenda, and participate in program development and service. Competitive salary commensurate with qualifications and experience.  Interested and qualified candidates must complete the University’s online application at https://employment.usf.edu  and upload 1) a letter of application  describing research interests and teaching philosophy, 2) curriculum vitae, 3) a sample of scholarly writing, 4) dissertation abstract.  In addition, three letters of reference are to be sent by the referees either via email to pnmacgeorge@usf.edu,  or by mail to:
University of South Florida
School of Art and Art History
Attn: Academic Program Specialist
4202 East Fowler Ave. FAH 110
Tampa, FL 33620-5350

Applications must be received by 1/7/13. AA/EA/EO employer. Women, minorities, veterans and persons with disabilities are strongly encouraged to apply for this position.  The search and selection process will be conducted in accordance with provisions of the Government in the Sunshine laws of the State of Florida.  For additional search information or disability accommodations, contact Paula MacGeorge at 813-974-9240. This position is subject to a criminal background check.

Posted by Chika Okeke-Agulu at 8:06 PM No comments:

If you are in the Tri-State area, this is one lecture that will be worth a trip to Princeton. Me, apart from the thrill of seeing my dear friend Sidney again, I really look forward to this lecture that is based on the fascinating research she has been doing in Uganda for more than a decade now.

Posted by Chika Okeke-Agulu at 9:52 PM No comments: 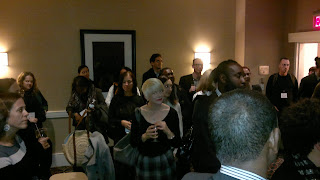 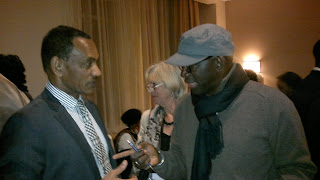 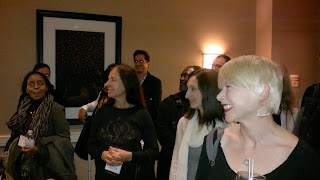 Posted by Chika Okeke-Agulu at 12:53 PM No comments: