The Trouble with Art Restoration in Nigeria

This past weekend, in The Guardian on Sunday’s “Artsville” column by my friend Toyin Akinosho—without doubt the most important arts and culture columnist in the history of Nigerian print media—I read with profound sadness about another incident of “restoration” of a legendary Nigerian artist’s work. Months ago, in “Art/World”, my erstwhile column in NEXT newspaper, I had called attention to the troubling decision by the owners of the National Theatre, Lagos to “rehabilitate” Erhabor Emokpae’s sculptural frieze on the Theatre building. This present case is no less distressing. According to Artsville, Engineer Yemisi Shyllon—an art patron whose collection of modern and contemporary Nigerian art is among the most impressive anywhere—had seen a “deteriorating” 1952 painting by Ben Enwonwu in an office at the University of Ibadan. According to him: “I went ahead to commission one of the very best of Nigeria’s restorers, Mr. Oyerinde Olotu, to restore the work at a whooping cost of N1million… After three weeks of arduous restoration and conservation work, the painting is now fully transformed…”
In a different age and on a different subject I would be the first to send a note of appreciation to the art patron, for doing something in country where no one cares about the maintenance of everything from human lives, to basic infrastructure and, yes, art. Yes, Engineer Shyllon has done a tremendous lot to support art and artists. But on this matter I feel differently. Because it is inexcusable for people to assume and perhaps believe that all it takes to restore works of art worth anything is to have another good artist touch them up with paint. The business of restoring and conserving works of art is not quite the job of just competent artists. The model of art restoration and conservation in today’s Nigeria, as the National Theatre and now Enwonwu cases make one terribly aware, is reminiscent of the age when Popes, Cardinals and collectors routinely hired artists to take care of deteriorating or “immodest” works, and we know what that did to, say, Da Vinci’s Last Supper. The question is why Nigerians have to make the same mistakes all over again.
I can understand the dilemma of someone who cares about art, and who is passionate about doing something about the sorry condition of works by important Nigerian artists. But the place to begin is not by simply having artists do the so-called restoration and conservation work, without I am sure the kind of exacting examination of the condition of the original canvas, sizing, paint, varnish, etc, before appropriate conservation and restoration can be done by trained hands. The truth is that the kind of intervention visited on the Enwonwu painting has more than likely caused more long-term damage to the original work that all the dust and humidity in that Ibadan office.
It seems to me that the Nigerian modern and contemporary art industry has grown sufficiently big for there to exist somewhere in the country a conservation and restoration laboratory. This very important work cannot simply be left in the hands of amateurs, which is what studio artists, no matter how talented, are. I would go so far as to suggest that invaluable works by an artist of Enwonwu’s stature must never be subjected to the so-called restoration, even by their current “owners.” We just cannot afford to let those who will come after us to wonder how come we were so damn ignorant, or uncaring about the long-term effects of our actions on works of art.
Posted by Chika Okeke-Agulu at 1:54 AM No comments:

Dr. Ugiomoh spent six days in Lagos (hundreds of miles away from his home in Port Harcourt), and was finally given the visa by 3:00PM on Friday. Which meant that he left for the airport from the Embassy. So, the conference organizers were relieved to see him Saturday morning. This afternoon he gave his paper "African art history after Hegel," which raised many questions about writing African art history. Dr. Gerhard Wolf of the Art History Institute in Florence gave a fitting bi-lingual lecture on "Art Histories or Art History?" to end the deliberations, which if anything showed once more--as did James Elkins's book Is Art History Global?--the multitudinous nature of this discipline today. The fact that these conversations are taking place at all says so much about the extent to which things have changed inside art history. Pfisterer and his team at LMU ought to be proud to have joined the leading front of the discussion. 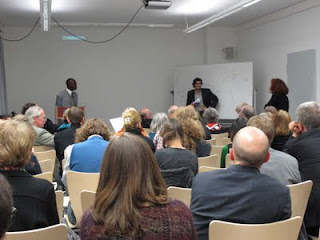 Dr. Frank Ugiomoh taking a question from the audience after his presentation (Photo: Chika Okeke-Agulu) 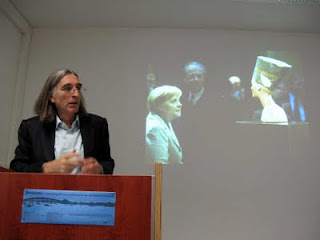 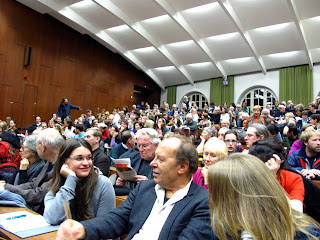 A section of the audience in the massive LMU auditorium where Hans Belting gave the Keynote lecture Nov. 12 (Photo: Chika Okeke-Agulu)


Yesterday, was the opening of the conference on global art history, "Horizonte: Principles and Terms of Global Art History," organized by a team of art historians led by Professor Ulrich Pfisterer, who holds a Chair at Ludwig-Maximilians University, Munich. The uber-art historian Hans Belting gave a keynote lecture that, I understand, set the grounds for the knotty issues tackled by panels that started today and continuing tomorrow. Bottomline is that there is no good news, perhaps not anytime soon, about the value of global art history, and I am not saying this because my paper was titled "Art History, Globalization and the Specter of Difference"! Two noteworthy things that have happened here: first, at the end of Professor Belting's lecture, during the reception that must have had a million people jostling to make new acquaintances while grabbing snacks and drinks, he wondered why I looked so despondent during his lecture (I was seated at the front!). I was struggling to keep jet-lag at bay, I informed him, and moreover, I did not understand a word of his talk and failed woefully to follow him through the slides presentation. I must have sprouted more gray hairs trying to understand the part of his lecture that dealt with contemporary African art! His lecture was in German and no translator was at hand! It got even worse for me (the only speaker in the conference who did not have German as first/second/or third language) in the morning panel today, which had all panelists delivering papers in German. Of course, I said to myself, I should have learned some German in graduate school. But, well, I didn't. And I don't have immediate plans to do so! Traveling from my native Igbo to English and a little French is all that I can take. The paradox of course is that a conference examining the question of global art history reinforces the boundaries of linguistic differences and the pressures these put on the possibilities of a global art history, or even a global conversation, simple. The world needs translators!

Second, as I write, the organizers are still not sure that my colleague from University of Port Harcourt, Nigeria, Dr. Frank Ugiomoh will show up to give his paper Saturday morning (he is the only non-European invitee living outside of Euro-America). The problem? Well, it turns out the German Embassy in Nigeria seems unenthusiastic about granting him travel visa. So when really smart folks talk about the ease of movement across borders in the age of globalization, they must not be from countries below the visa line (think of the migrants from these countries dying in the Mediterranean trying to reach Europe). Or when people like James Cuno argue that "global" museums must be defended for their role in safeguarding and making accessible to the whole world mankind's artistic heritage, I say to him, yea right! Because your idea of the whole world does not include the millions like Dr. Ugiomoh who must go through severe psychological torture to get legitimate access to fortress Europe/America. This sucks!

While I gripe about these realities of our postcolonial age, here are some pictures from the conference, which has gone really quite well. I can say so for my panel of anglophone speakers (which included papers by Kitty Ziljmans and Monica Juneja), and the response to the presentations by Belting. 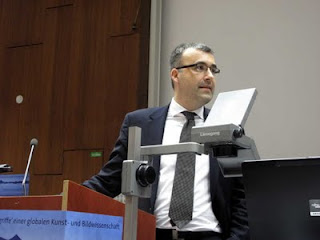 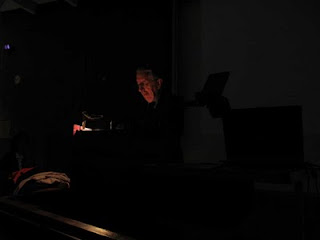 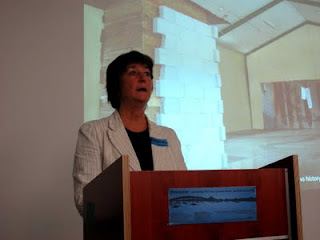 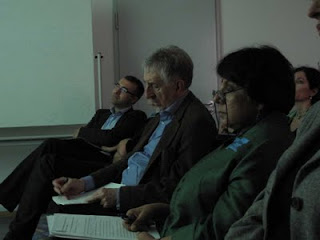 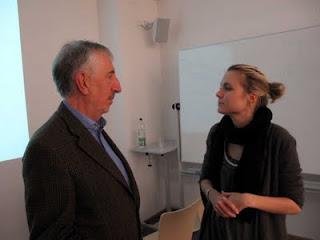 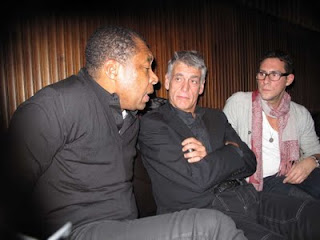 As it turned out, the book presentation and my conversation with Okwui at the New York Public Library on October 27 were, on all counts, quite successful. The Margaret Liebman Berger Forum was filled up, the books sold out (to the disappointment of many who came to get a copy of the book), and many of our friends turned out. Even our editor, Monica Rumsey--who must be the best editor in the whole world!--came with her son to celebrate with us, and for us to meet in person after a summer of incredible work that made the book possible. So, when we were done with the book signing, we went with some of our friends--Salah Hassan, Carina Ray, Thelma Golden, Chris Ofili, David Adjaye, Glen Ligon, Claire Tancons, Alex Galan and Andrea Albertini--for Champagne (Okwui ordered a cranberry mix for me, an incorrigible teetotaler). 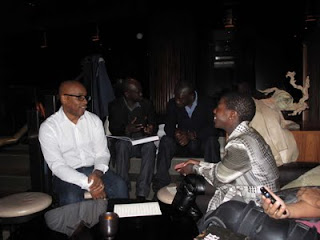 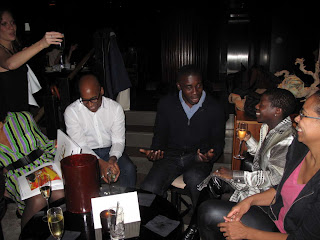 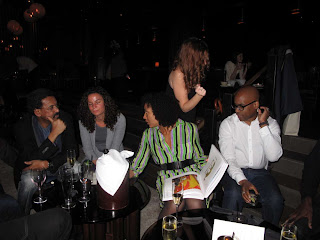