Horst Köhler and the politics of truth 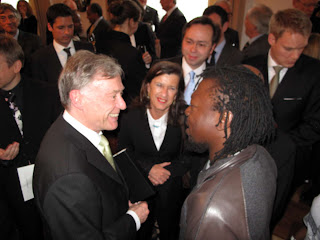 Last Sunday during a reception at the Bellevue Palace, the official residence of the German Federal President, Dr. Köhler made what sounded like a smart joke during a conversation with Pascale Marthine Tayou, Antonio Ole and myself: at the end of a long banter, Pascale said to him, "see you on Thursday" (the opening of our show at the Nationalgalerie), to which Köhler replied, "Who Knows Tomorrow"! We all laughed, surprised that Mr. President had absorbed the wisdom of this ubiquitous and popular saying you hear in many parts of Africa and which is also the title of our show. Little did we know that the gathering at the Bellevue Palace was perhaps Dr. Köhler's last public event, call it his last supper. On Monday morning the air was thick with the news of his unprecedented resignation as the Federal President of Germany. Apparently, the man had said what many see as a truth that could not be named, at least by a public official of a Western nation: that Germany was in Afghanistan to protect its economic interest. Critics called for his head. Last Sunday was the second time I had encountered Dr. Köhler up close. And on both occasions I remember wondering if he really was a politician, due to what was his seeming inability to master the art of shameless diplomatese. When in December someone in our company mentioned that our show might be a bit controversial--as some might be too uncomfortable with its invocation of Germany's sordid and buried colonial history--he responded that the show "had better be [controversial]!". And last Sunday when some fellow, Prince Asfarate, from the defunct house of Haile Selasie of Ethiopia, stupefyingly claimed that Germany should teach African people the culture of debate and oppositional engagement, he was not just "demolished" by Unity Dow, the really smart Judge from Botswana who gave him three sayings in Tswana (I believe) that clearly demonstrated the virtue of disputation among her people; Dr. Köhler himself exhorted, without directly addressing the exiled Prince--I guess he was trying to be a nice host--that the West must reject the hubris (that was his word) of believing that it has the final solution to all the world's problem!

Although it is unfortunate that we will not see Mr. Köhler tomorrow at the opening of Who Knows Tomorrow, I pay homage to his candid view of the West's relationship with the African continent and the rest of the world. For it is this conviction about the lack of equity in international politics that I believe made him a most ardent advocate of the show, even when it seemed to have run against insurmountable roadblocks. It is this conviction that inspired his Africa Forum that sought to encourage a new generation of Africans to take responsibility for the future of their countries... It is this view of the world that made it impossible for him to learn the art of equivocation that seems to be part of the job description of heads of powerful countries--especially in their dealings with powerless states.

Just think of the mealy-mouthed statements that have come out the American White House in response to the killings of several civilians on a humanitarian journey to Gaza by Israeli security this week. This reminds me of Peter Tosh, the legendary Jamaican Reggae star, who, in his memorable track "Equal Rights," sang: "EVERYONE IS CRYING OUT FOR PEACE, NO ONE IS CRYING OUT FOR JUSTICE!
Posted by Chika Okeke-Agulu at 3:23 AM