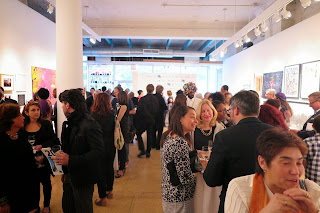 Last night the Newark (NJ) based Aljira: a Center for Contemporary Arts celebrated its 30th anniversary and annual benefit auction. For those who don't know, Aljira is a modest establishment that has had a tremendous impact on the careers of artists from all over the world; artists who might not have received any attention from the stuffy, so-called mainstream New York museums and galleries. Thanks to Aljira, many of these artists have gone on to establish substantial careers in the art world. Established in the mid 1980s by visionary minds who set out to make a difference, and to reshape the landscape of the contemporary art scene of the US North East in particular, Aljira has, after these thirty years, remained, in spite of its relatively unimpressive financial resources, a crucial space for convening art and artists that truly reflect the diverse, thrilling, and confounding scene of global contemporary art. It is a vital part of the Newark art ecosystem.
It is thus equally significant, to me at least, that on this thirtieth anniversary of Aljira, its board of trustees decided to give the Timehri Leadership in the Arts Award to my friend Okwui who has had a longstanding relationship with this institution (the other award recipient is the influential photographer, Dawoud Bey). Besides the fact that Okwui organized his very first art exhibitions at Aljira in 1994, the Carl Hazelwood, the co-founder of Aljira was also a founding member of the editorial of our journal Nka: Journal of Contemporary African Art established by Okwui also in 1994. For him then to receive the Timehri Award this year that he capped his curatorial career with the directorship of the Venice Biennale (more than a decade after director the Documenta), is doubly meaningful. Okwui, still in Venice, could not come to Newark for the award ceremony. But I was on hand (Marcia and I were guests of my colleague, the eminent historian and artist Nell Irvin Painter) to receive the award on Okwui's behalf.

Posted by Chika Okeke-Agulu at 2:37 PM