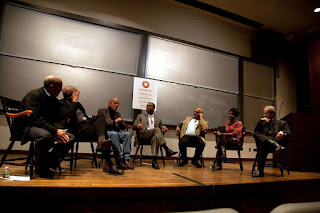 I learned so much listening to these men and women about the Civil Rights movement, and although I had to go watch again the monumental Eyes on the Prize documentary, nothing compared to the two winter evenings when I, as a student, listened to my elders speak of a time when the youths of America--not many of them, mind you--saved this country from the festering canker of its own sordid history. But as they all agreed, despite all that they and their mates in the Civil Rights Movement achieved, their work remains, alas, uncompleted. Just look at America today.
Posted by Chika Okeke-Agulu at 6:34 PM