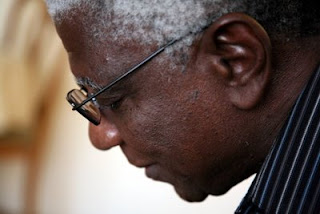 It is impossible, after the feature on him by New York Times Magazine yesterday, to miss this point: El Anatsui has come to stay in the quirky consciousness of contemporary art and its validating institutions. Despite that it took all of forty years to get here, it has been indeed a journey of epic proportions.

It is not surprising though that some curators, including someone who first showed Anatsui's work only two years ago--almost twenty years after he joined other important contemporary artists at the first Earth Summit at the Arte Amazonas in 1993; after he won the Kansai Telecasting Prize at the Osaka Triennale in 1995; after his appearance at the Gwangju Biennale in 2004; after his major traveling show organized by the Oriel Mostyn Gallery in Wales, and so on--now want to make the amazing claim to bringing him into the circuit of contemporary art, beyond the supposedly peripheral Africana network. Success, didn't they say, has many fathers (and mothers)!

Thankfully though the New York Times article by Alexi Worth makes it clear that Anatsui's rise to the summit did not happen overnight; not by the inclusion of one work at Venice, but through sustained commitment of several curators, critics and scholars who had stayed with his work long before it became "fashionable." A major part of this story, of course, is the support of Anatsui's work by London's October Gallery which has, I believe, done much more than any institution to keep the artist's work in the world's view.