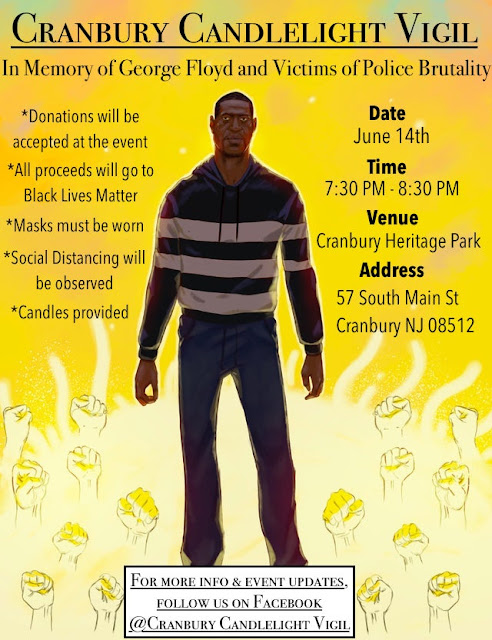 This evening I spoke at a candlelight vigil co-organized by the Coalition for Peace Action, the Bayard Rustin Center and area high school students led by the amazing Princeton High junior Isabel Sethi.

Here is the text of my speech:

Two nights days ago, another black man, Rayshard Brooks, was gunned down by the police in Atlanta. Someone had called the police on him. And when two white officers showed up, there was a rough up. Rayshard took one officer’s Taser and ran. Seconds later, they pumped bullets into his body and went about searching for the casings while Rayshard bled to death. What was his crime? Sleeping in his car in a parking lot.

For the past three weeks, we watched thousands, in cities large and small, take to the streets to express their outrage at the terrible incident in Minneapolis on May 25. We all watched in disgust as a white police officer knelt on the neck of George Floyd, and for nine minutes squeezed the life out of him in broad daylight. What was his crime? They suspected him of using a counterfeit 20-dollar bill.

The loathsome murder of Floyd has rightfully awakened America to the ugliness of a history that reaches back hundreds of years. This history began with the sale, humiliation, dehumanization and exploitation of black people shipped from Africa to build, unpaid, the powerful nation that America is today. And, for long black people have cried out, begged, revolted, and campaigned against the regime of oppressive violence that marked their existence in the United States.

For long, white America, ignored the condition of black Americans, even after they were granted full citizenship and given the benefit of equal rights under the law. For long, black people have waited, prayed, and hoped that the transformation of the police—an institution that openly terrorized black people in the era of slavery and Jim Crow—would be complete, and that black encounters with the police, no matter how ordinary, do not end in injury, trauma or death. The murder of George Floyd by the police, it seems, has done what countless others could not do; it seems to have ignited the moral outrage of white America about an age-old black experience.

Yet, the murder of George Floyd, Rayshard Brooks, Breonna Taylor and countless other black men and women is not just an indictment on the police; it is an indictment on any town or county or state that hires the police, arms them and demands of them to maintain law and order by any means necessary. We do all this and not accept that the failures our police is on us?

Each American that excuses state-sanctioned violence, celebrates our gun culture, and ignores the transformation of police in black neighborhoods into occupying forces is responsible for the morbid outcome of America’s investment in a culture of forceful policing of black people and black communities.

Beyond ongoing debates about reforming or defunding the police, each one of us must ask ourselves tonight:

Am I willing to stop not only police killings of the George Floyds, Rayshad Brooks, Breonna Taylors, Eric Garners, and Sandra Blands but to actively seek the end of the systemic racism that undervalues black lives, black experience and black citizenship? Do I want retain an America in which white people’s comfort depends on the oppression and exploitation of black and other racial minorities? And, are we willing and ready to accept that racism in America was invented and maintained by white people; and that it is white people’s burden to end it?

When I see the unprecedented diversity of the people out in America’s streets demanding for justice for George Floyd; when I see the thousands of youths—including the co-organizers of tonight’s vigil—call for drastic change, I am hopeful.
The past and present failed black people in America; the youths of today, inspired by the irrepressible leaders of BlackLives Matter, must decide on a different and just future, for America’s sake.

Each of us, especially the white people here tonight, must be the change we want to see in our society, and that change starts with how we see and relate with black people in our families, neighborhoods, schools, towns, and counties. If we do not commit, in our daily lives, to the end of individual or systemic racism in America, no amount of candlelight vigils for George Floyd, or for the next black victim of police violence, will save us from the indictment of history.