Here is El Anatsui giving his formal speech during the American Academy of Arts & Sciences induction ceremony last week at Harvard. Since I met him in 1985, this is the first time I have seen him in a suit, and I cannot help but share the sight! Not bad at all, this suit ensemble. 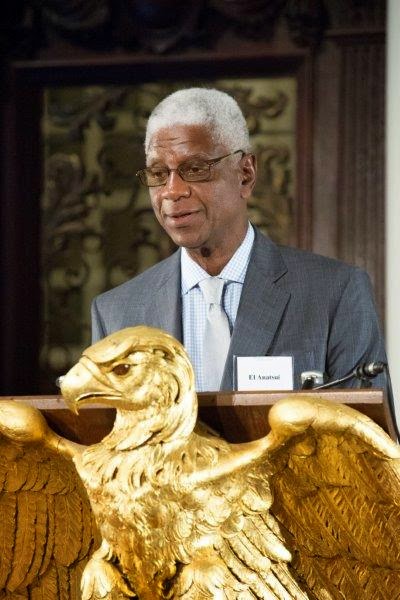 Posted by Chika Okeke-Agulu at 10:20 PM No comments: Links to this post

This past Saturday, El Anatsui's "Trains of Thought" exhibition opened at Jack Shainman's 524 W 24th St. Gallery in Chelsea, NYC. The works show the extent to which Anatsui keeps expanding on the language of semantic abstraction using the syntactical and lexical elements of folded, manipulated aluminum strips and plates, and copper wire. It is quite something seeing how he has, with the confidence that comes with mastery of a medium and technique, reintroduced the poetics of asymmetric negative and positive space--the fundamental design element associated with Igbo Uli drawing/mural and the Nsukka School's work--into his sculpture, and the result is compositionally stunning, because it challenges normative notions of pictorial order and balance. OK, this is a tease; I will be back to this subject, here or elsewhere. Soon.

*Except otherwise noted, all photos by Chika Okeke-Agulu


Posted by Chika Okeke-Agulu at 3:26 PM No comments: Links to this post 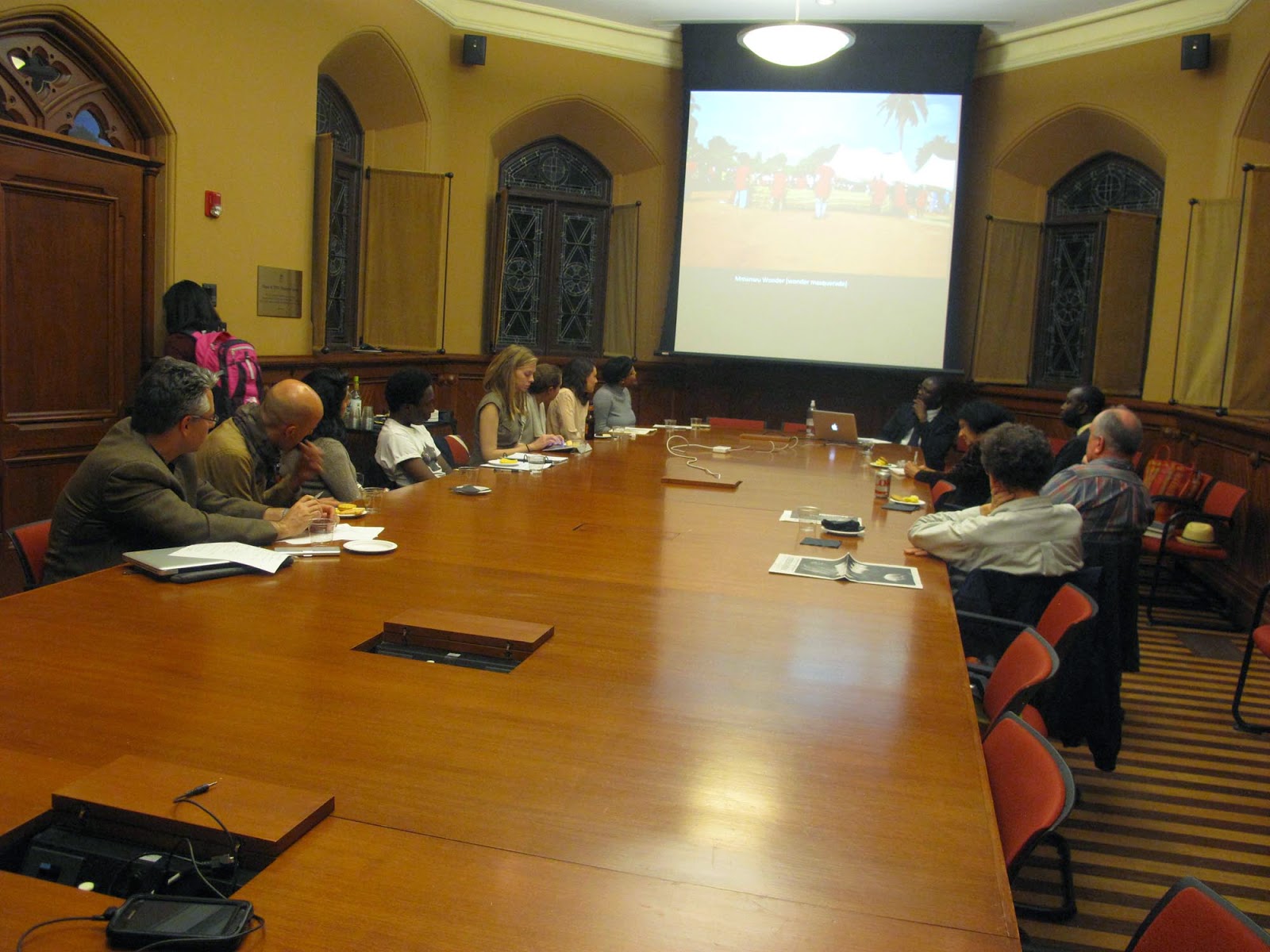 Last week, Ugochukwu-Smooth Nzewi, the curator of African art at Dartmouth College's Hood Museum of Art gave a talk, organized by Perrin Lathrop and Jessica Bell (both graduate students at the Department of Art & Archaeology, Princeton). Part of a series, "At Work with Artwork: Discussions with Museum Curators and Directors," Nzewi's talk ranged from his intellectual formation as a practicing artist and independent curator in Nigeria, to his further training as an art historian (under Sidney Kasfir at Emory), and his current work as a museum curator in a leading university art museum in the US. He also shared his experience as a co-curator of this year's Dakar Biennale. See my review of the Biennale in the October issue of Artforum International (subscription required for access).
After listening to him, and as I concluded in my review, all I can say is this: If the people in Dakar really understand the stakes of the Dak'Art Biennale; if they truly appreciate what that biennale means to the artworld of Africa and its Diaspora, they cannot continue with what has been an self-evident, unfortunate, careless, business as usual attitude. The embarrassing event they put up this year, despite the curators' commendable effort to making a good show, must not happen again. Else, they will be hard-pressed to find any serious, self-respecting artist wanting to be a part of Africa's flagship biennale. If after 20+ years they still do not know what it means to treat art and artists respectfully, and that biennale production requires a healthy dose of professionalism, they should just simply pack up. OK, let me edit myself: the show must go on; but they should simply just sit up! Especially given how much the government of Senegal has invested in this much-needed event since the early 1990s.

Next stop for Nzewi, after the bitter-sweet experience of Dak'Art, is his major, traveling exhibit for the Hood Museum: a thematic survey of contemporary African art during the 1980s. As an art historian, that's a show I can't wait to see, in 2016.

Posted by Chika Okeke-Agulu at 3:34 PM No comments: Links to this post

So, Marcia is presenting her new body of work at the 1:54 Contemporary African Art Fair in London, which opens tomorrow. Represented by Purdy Hicks Gallery, her exhibition includes two new series "Ethnographica" (collages) and "Androgyny" (watercolors), along with her sculptures. Here is a sampler of the works on show.

1:54 takes place at the Somerset House, Oct. 16-19, and features 27 galleries, many of them based in Africa. In its second year, the fair can now legitimately claim to be the second prime venue to buy and sell contemporary African Art, after the Johannesburg Art Fair. Will it eventually surpass JAF, because sited in London? It all depends on which fair demonstrates firmer commitment to high quality work and commands respect of the international art market.

Posted by Chika Okeke-Agulu at 3:28 PM No comments: Links to this post


When the Present Begins

A conversation over two days (Oct. 10./11.), proposed by Johann Jacobs Museum and Georg Schöllhammer, Felix Vogel and Tristan Weddigen on the occasion of the exhibition „Gastspiel“ (curated by Damian Christinger) at Museum Rietberg.

There was once a time when we talked about modern art, but today the term sounds strangely outmoded. If we remember correctly, this type of art grew out of two conflicting stimuli: the art that had gone before; and the society around us. Today, on the other hand, we talk of contemporary art. In fact, there are whole museums of contemporary art: it's almost as if the process of historic sedimentation had become frozen in an infinite sense of the present. But is there a threshold or a caesura, some form of recognition or forgetfulness between the one and the other, between the modern and the contemporary? Is this presence really as global as it would have us believe? Despite its best intentions and failed attempts at export modernity was essentially a western game. And if so, what retroactive effects does globalization have on the former centre that was once able to distinguish between itself and the other barbarians, between applied and fine art, or even between art and non-art? It    seems clear that institutional edifices such as those museums that schlep the ballast of the 19th century around with them are in danger of either being crushed by the burden or seeking some form of emergency exit in populism and spectacle. But it seems equally clear that all the newly created institutional edifices, such as the biennales, are unable – at least on the strength of their own efforts – to generate the critical terminology or new realities that would have more substance than their latest press release with its mix of curatorial matters and the interests of the promoters.

"When the Present Begins" is intended to be a halfway informative exchange of ideas about the state of the present, of the artistic contemporary. This exchange is taking place in two Zurich museums, of which one, the RietbergMuseum, is exclusively given over to non-western art. With its "Gastspiel" exhibition, it has admitted contemporary art for the first time to its premises. The Johann Jacobs Museum, on the other hand, finds the things to which it dedicates its energies along global trade routes. These may well be art. But, then again, they may not.

It is the Anatsui Season!


Yep, Anatsui is in town; actually all over the east coast for a number of programs all happening this month. After the big show at the Brooklyn Museum last year and at Mt Holyoke College this year, he is back with new work, but also to receive an award, and to talk about his art and illustrious career. To begin with, he will be at Harvard to be formally inducted into the American Academic of Arts and Sciences in a series of by-invitation-only events, October 10-12; too bad ordinary folks like me don't get to see how they do it! Then on October 18, his solo exhibition opens at the Jack Shainman Gallery. (And by the way, Jack Shainman is also opening solo shows of Kay Hassan same day as El, and that of Turner Prize nominee, Lynette Yiadom-Boakye soon). On the 23rd, I will be having a public conversation with El at the Johnson Museum of Art, Cornell University. While another solo exhibition of El's work opens on October 28 at the venerable Mnuchin Gallery in the New York Upper East Side. I am going to all these events, except of course for the--roll my eyes--exclusive Academy program in far away Harvard!

Posted by Chika Okeke-Agulu at 4:01 PM No comments: Links to this post