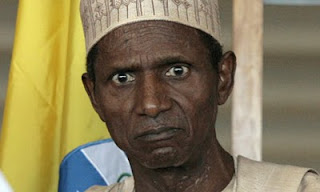 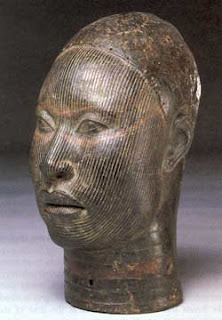 It used to be said that the magnificent, highly naturalistic brass heads made by sculptors from ancient Ife (in southwestern Nigeria)--but which the German enthologist Leo Frobenius initially said was proof of the existence of the mythic Greek city, Atlantis--might have been heads of royal funerary effigies. But the Harvard art historian Susan Blier claimed with great critical precision in her article on Obalufon Arts" in Art Bulletin some years ago that the these heads must have indeed been used in succession politics in the royal houses of Ife. How? Well, she suggested that they were not used as  surrogate portraits of the king whose death was kept secret until the intrigues of succession were sorted out. Persuasive as that argument was, it seemed quite implausible to me at the time. After all, how can a whole people be fooled by a lifeless piece of sculpture (with all the fake facial hair and supposedly impressive dress).

But the events of the past 3 months in Nigeria, in some bizarre way, have convinced me about the plausibility of Professor Blier's insight on the Ife heads. Come to think of it. Since the Nigerian president Umaru Yar'Adua left the country last November, till now that we are TOLD that he has returned, and installed in the Presidential Villa, no one other than his wife and about four other members of his shadowy kitchen cabinet have set their eyes on or spoken to the man, not even the key members of the government who should be privy to our national secrets. The president retains his office (never mind the Acting President thing) on the evidence of a strange interview he supposedly granted the BBC from Saudi Arabia in January, and on the rumor that he was the principal passenger of a mysterious plane that sneaked into Nigeria in the dead of the night two days ago.

To imagine that I wasted so much of my time wondering how the people of Ile-Ife, according to Blier, could have been "fooled" to think that the king was alive on the evidence of a physical, realistic looking portrait with a face possibly shielded by his beaded crown as tradition allowed, when in 21st-century Nigeria, a king is running the country simply on the basis of a voice recording and, now, the mysterious arrival of plane and ambulance at the Abuja airport.

Anyways, it does not help my nationalist ego to equate the most populous black nation with small ancient kingdom of Ife. But let me ask as loudly as I can. How do we know that it is not a corpse that is ruling Nigeria? And couldn't Yar'Adua's kitchen cabinet find a good artist, say the American sculptor Duane Hanson (if he can be bribed to return from the dead), to make a terrific--talking, mobile--effigy of the man; something that miracle-seeking and prayerful Nigeria can see and listen to, and thank God that their 3-month national prayers have been answered. Nigerians deserve this spectacle, while the succession intrigues continue in the Abuja royal house.
Posted by Chika Okeke-Agulu at 1:15 AM