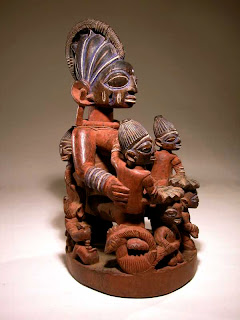 So yesterday, my exhibition called Life Objects: Art and the Lifecycle in Africa opened at the Princeton University Art Museum. Co-organized with Holly Ross, an independent scholar, and fabulously designed by Alan Knezevich, this is one very beautiful exhibition of which I am so proud. All the works on show, which includes many really fine examples of African sculpture, and early 20th-century postcards showing objects similar to the ones on show in their cultural contexts, are available online. Several came from the Smithsonian's National Museum of African Art (including the glorious Nkanu Initiation panel the never leaves the NMAfA!) and others from important private collections, and a couple from Princeton's collection. If you can't come to Princeton, the only thing you will miss, which is crucial though, is the tropical morning-haze, ambient color of the gallery space, and Alan's design! The exhibition runs till January 10, 2010.

Check out the online show at:
http://artmuseum.princeton.edu/art/collections/online_exhibits/Life_Objects/index3.xml
Posted by Chika Okeke-Agulu at 4:29 AM

company, AceSoftech can not only provide you High quality web sites but also the prices

of the company is most competitive. The services provides by the company are as follows. Web