STOP THE CARNAGE IN GAZA! 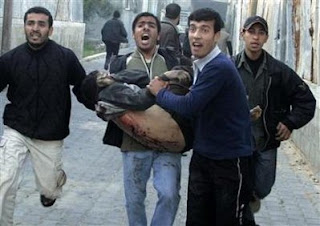 Yes, I am still giddy about the election of Barack Obama two months ago, and yes, I know he won't be the president of the United States until January 20 (waiting for this date feels like forever). But I cannot understand; I am even frustrated that he has not made any statement about the carnage in Gaza. How many human beings and how much blood will it take for him to say something, even if to express shock at the number of Palestinian children and women being slaughtered "legitimately" by the Israeli Government, in the name of fighting terror.

The killing of hundreds of civilians is INDEFENSIBLE! And I cannot see how this is going to guarantee peace and security in the middle east, and in our world.
Posted by Chika Okeke-Agulu at 3:34 PM