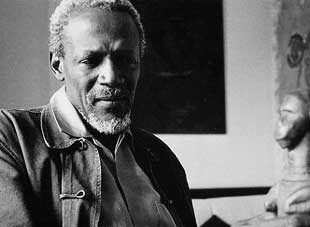 The artist Iba Ndiaye has passed on. It is impossible to overstate the significance of his work as a modern African and contemporary artist. One of the two (the other being Papa Ibra Taal) giants to come out of Senegal in the post-WWII period, Ndiaye took his place in history as a young artist who, having trained in Paris and associated with the School of Paris, was invited by the prophet of Negritude and first President of Senegal Leopold Senghor to serve as a founding director of the newly established Ecole des Arts' fine arts section. His subtle yet firm critique of the sort of aesthetic Africanism Senghor desired of his new school would mark him as an artist whose commitment to the artistic enterprise trumped any facile, problematically articulated ideological mission for the postcolonial African artist. In this he reminds me of the Ethiopian artist, Gebre Kristos Desta, whose identification with a modernist vision unhitched from national cultural specificity is equally legendary. Given the political climate of the 1960s—the fervor of nationalism and the waning embers of various Africanisms—Ndiaye's insistence on the right of the artist to determine the scope and tenor of his relationship with identity politics was as remarkable as it testified to his artistic and personal integrity.
But also, Ndiaye was a terrific painter, a master of the gestural, expressive-poetic brush and restrained palette in the tradition of the Spaniard, Francesco Goya. His powerful analysis of subjects as ordinary as sheep ready for slaughter, or Jazz musicians, or the arid Sahel landscape, leaves you totally in awe of his stunning ability to evoke metaphysical states by sheer manipulation of paint and recognizable, if altered, forms.
It is compelling to feel a sense of loss—and my heart goes his family at this time—with Ndiaye’s transition. Yet, his achievement as an artist transcended his mortality; he indeed earned his right to join the ancestors, having been eminently successful in his sojourn here. For this, I celebrate his life, his work, his memory. May his journey be smooth, and may his art live long!
Posted by Chika Okeke-Agulu at 8:10 PM